Art on a Limb

​The “Art on a Limb” exhibit of artist-decorated trees will be on display at the Huntington Museum of Art from November 29, 2022, through January 8, 2023.

The Palette Tree in HMA’s Virginia Van Zandt Great Hall features palettes painted or decorated by regional artists. Other trees in the “Art on a Limb” exhibit are decorated with ornaments created by area artist groups and art teachers. 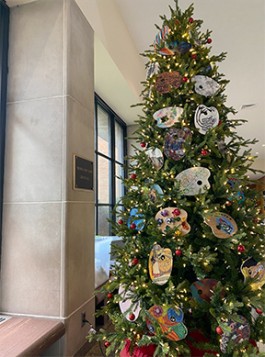 The artist will discuss her work in a free public presentation at HMA on March 30, 2023, at 7 p.m. Reception to follow. A three-day workshop titled “Integration of Forms and Surface” will be presented at HMA on March 31 through April 2, 2023, from 9 a.m. to 4 p.m. each day.

Growing up in Connecticut, Donna Polseno was influenced by her parents. Her mother was skillful and handy and her father, a naturalist, was a painter and illustrator whose work supported the family. Inspired to pursue a career in art, she received a BFA from the Kansas City Art Institute in 1972 and earned an MAT from the Rhode Island School of Design in 1974. Upon graduating, she and her husband moved to rural Floyd, Virginia, in the Blue Ridge Mountains, where they built a studio and a family. Her ceramics have been featured in major museums and galleries across the country. She is represented in numerous private, corporate, and museum collections such as the American Museum of Ceramic Art, Pomona, California; the St. Louis Museum of Art, St. Louis, Missouri; and the Mint Museum of Contemporary Crafts, Charlotte, North Carolina. She has received two National Endowment for the Arts Grants and a Virginia Museum Fellowship.

Throughout her successful career, she has balanced the demands of being an award-winning studio artist and a noted educator. She has taught workshops at Anderson Ranch Arts Center, Arrowmont School of Arts and Crafts, Banff Center for Arts and Creativity, and Penland School of Craft. She has led college summer programs at Alfred University and the University of Michigan and, from 2004-2020, she taught ceramics part-time at Hollins University in Roanoke, Virginia, where she created and directed the annual Women Working with Clay Symposium. For many years she has taught at La Meridiana Ceramica School, an international ceramics school in Certaldo, Italy, where she and her husband also maintain a small house and studio.


ABOUT THE ARTIST’S WORK

Donna Polseno began her career making pottery and remains an active studio potter. Most pots are slip cast and then altered or reconstructed as she strives to achieve a sense of energy, life, and mystery in her functional work. About her pottery, Polseno states: “I have made many different types of pottery over my career but have always been interested in the way decorative elements can be used to enhance a form, whether one is using an elaborate pattern or the simplest marks.” Those surface treatments draw inspiration from the natural world – the shape of leaves, grasses, flowers, birds, and abstractions of these forms.

Beginning in the 1980s, she blazed a creative trail parallel to her pottery: ceramic sculpture. Her figurative ceramic sculptures center around the metaphor that women are the spiritual vessels of life, capable of giving, nurturing, and protecting. While they remain vulnerable and fragile, like the precariousness of all life, these archetypal female forms radiate a sense of strength and universal beauty. 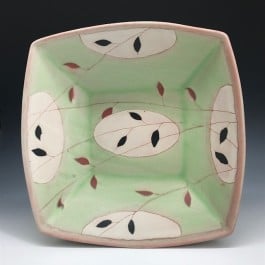