Works by African-American Artists from the HMA Collection

The history of African-American art reflects the larger story of America, a land that saw millions of enslaved Africans brought to its shores during the colonial and antebellum periods. These forced immigrants were stripped of their own cultural traditions and compelled to create new narratives in a strange and unforgiving land. Opportunities to freely express themselves or to receive specialized instruction in art were rare for African Americans in the antebellum period and equally so even after the abolishment of slavery at the time of the Civil War. Only by the time of the 20th century, with developments such as the Harlem Renaissance, did a growing culture of African-American visual art begin to blossom and burst onto the national scene. Though still hampered by continuing prejudice and a lack of opportunity, African-American visual artists have nevertheless emerged to become a strong voice in the contemporary art scene in the United States.

Over the past several decades, the Huntington Museum of Art has been building a distinguished collection of work by African-American artists. Included in the group is a painting by the most celebrated African-American artist of the 19th century, Henry Ossawa Tanner, an internationally successful painter and teacher. Perhaps the most widely known work by an African-American artist in the HMA collection is by one of Tanner’s students, William Edouard Scott. His painting Lead Kindly Light appeared in 1918 on the cover of The Crisis, the official publication of the NAACP that was edited by well-known African-American intellectual W.E.B. DuBois. It has been featured in exhibitions at major institutions and was recently highlighted in the PBS documentary Reconstruction: America After the Civil War. Another early 20th century work is a watercolor by Richard Lonsdale Brown, a talented West Virginia artist whose work was also featured in The Crisis. Prints by 20th century master Romare Bearden will also be included.

Many of the works in the collection have been acquired to commemorate the participation of artists as guest instructors in the museum’s Walter Gropius Master Artist Workshop program. Thom Shaw, E.B. Lewis, Nanette Carter, Willie Cole and Donald Earley have all led workshops, as have Joyce Scott and Carrie Mae Weems, both of whom have been honored with MacArthur Foundation “Genius” Awards.

Several artists with local ties will be featured in the show, including quilt artists and Huntington natives Tina Williams Brewer and Theresa Polley-Shellcroft, both former Gropius Workshop leaders, and poet/artist Elaine Blue. Works by prominent self-taught artists will also be on view, including selections by William Hawkins, Clementine Hunter and Dilmus Hall. 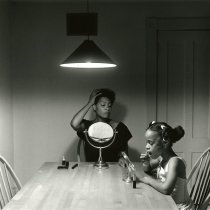