As a companion to the exhibition Central to Their Lives: Southern Women Artists in the Johnson Collection, the Huntington Museum of Art will feature a show titled Women Artists of the Mountain State, drawn from the museum’s permanent collection.

Though the rural nature of the state often limited the opportunities that were available for aspiring artists, whether male or female, there are nevertheless several notable West Virginia women who achieved success as professional artists. Chief among them is Blanche Lazzell, a Morgantown native whose woodblock prints and paintings are renowned for their modernist style.

Edith Lake Wilkinson, from Wheeling, was Lazzell’s contemporary in the rich artistic community in Provincetown, Massachusetts, in the early 20th century, where she produced a small but finely crafted body of work.

Many others worked in the colleges and universities in West Virginia, including June Kilgore at Marshall University, Grace Martin Frame Taylor at Morris Harvey College/University of Charleston and Paula Clendenin at West Virginia State University. Some assisted with the founding of art centers and museums in the state, such as Katherine Burnside with the Parkersburg Art Center and Olga Thabet at the Huntington Galleries (later Huntington Museum of Art). Their rich contributions to the state’s culture have inspired and enriched the lives of countless West Virginians, and recognition for their efforts is long overdue.

This exhibit is presented in Memory of Women’s Art Historian Chris Petteys. 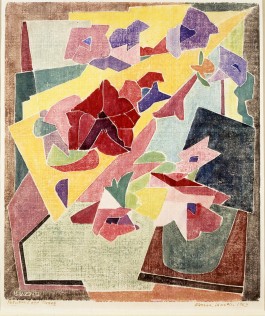