The wheel is one of civilization’s greatest inventions. Though derived from a simple shape, the construction of a working wheel took great ingenuity, and it was only within the last six millennia that a wheel-and-axle combination appears in the human record. This development was a significant advancement in technology as it allowed more efficient agricultural cultivation and vastly revolutionized transportation. It also was utilized in many other applications, such as pottery making and food processing.

HMA will celebrate this remarkable device with an exhibition of works that feature images of wheels in use. From the creations of folk artists such as Herman Hayes’ whimsical sculpture Large Star Wheel With Four Supporting Figures and Evan Decker’s Cowboy With Bells, Wheels, Squirrels, Hens to Huntington photographer Levi Holley Stone’s images of automobiles and bicycles, a variety of wheel-themed works are included.

Pop culture is represented in original artwork for comic books and strips depicting the Batmobile and Little Orphan Annie, while John Baeder’s Royal Diner illustrates the prevalence of the automobile in American culture. The exhibition features a wide range of mediums and will allow the viewer an opportunity to step back and look at a common object from a new perspective. 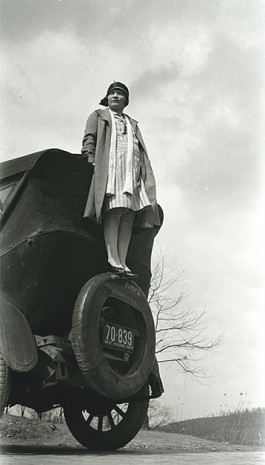