For thousands of years before the arrival of European explorers, indigenous civilizations developed along the banks of the Ohio River. Derived from a Senecan word, ohiːyoːh, meaning “good river,” this 981-mile-long waterway was a significant transportation and trading route, connecting far-flung settlements of prehistoric and historic cultures. Hand-carved artifacts from this ancient past continue to emerge from the fertile soil of the river valley, and mysterious earthworks dot the landscape to this day.

French colonists, who began arriving in North America in earnest during the 1600s, were the first Europeans to behold the Ohio River’s majesty. Described as La Belle Riviere or “the beautiful river,” this great river artery proved strategically important as both French and English interests fought for control of the North American interior. When the American colonies waged war for independence from Great Britain, the Ohio River Valley again became a picturesque battleground as each side raided settlements and shed blood to win the military support of the region’s native inhabitants. Its westward-flowing waters facilitated migration as European- American and African-American pioneers pushed into the Northwest Territory and beyond. While this cross-continental expansion ultimately concluded with One Nation, spanning sea to shining sea, it also precipitated the virtual erasure of this land’s native people.

From its origins at the confluence of the Allegheny and Monongahela rivers until its waters empty into the Mississippi River, major industrial cities burgeoned from colonial outposts and forts along the Ohio River’s course. The success of Pittsburgh, PA; Cincinnati, OH; Louisville, KY; Evansville, IN; and three of the five largest cities in West Virginia – Huntington, Parkersburg, and Wheeling – not to mention hundreds of smaller population centers, attests to the importance of this navigable waterway as a conduit for transporting goods, mobilizing people, and sharing ideas downstream. The Ohio River marks the southern border of Ohio, Indiana, and Illinois, and thus formed part of the boundary between free states and slaveholding states before the American Civil War. Exalted as the “River Jordan” by enslaved people who crossed its waters on the dangerous journey to freedom, it is estimated that thousands escaped slavery by reaching the comparative safety of the northern banks of the Ohio River.

Using a variety of artworks and objects from the Huntington Museum of Art’s permanent collection, La Belle Riviere will evoke an appreciation for the sublime geologic beauty of one of North America’s mighty rivers, its vast watershed and many tributaries, and the deep undercurrents of history that swirl just beneath the water’s surface.

This exhibit is presented by the West Virginia Chamber of Commerce. 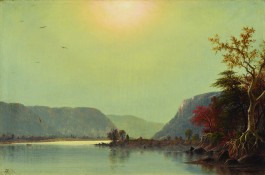