HMA will welcome Dan Anderson as a Walter Gropius Master Artist in April when the ceramics artist speaks about his work during a free public presentation on Thursday, April 20, 2017, at 7 p.m. Anderson will present a three-day workshop at HMA titled “Water Tanks and Related Architectural Delights” on April 21-23, 2017, from 9 a.m. to 4 p.m. Call (304) 529-2701 for workshop fee information or to register.

Dan Anderson’s ceramic works are equal parts vessel and industrial artifact, full of irony. These handsome replicas of manmade, metal objects are aged and impotent reminders of a once-powerful age. Oil and gasoline cans represent the machinery that once threatened to devalue hardworking human beings. Now, they, too, sit stoic, dignified, and worn out. The usefulness of machines in their original states is limited; as both producer and product of progress, machinery is doomed to eventual obsolescence. Paradoxically, by recreating them in ceramic – the more “primitive” medium – Anderson imbues these objects with new life and purpose. They will endure through the ages, underscoring the power of art to uplift the human condition.

Anderson is currently a full-time studio artist following 32 years of teaching ceramics (1970-2002) at Southern Illinois University Edwardsville (SIUE), where he now holds the rank of Professor Emeritus. Anderson received his BS degree in Art Education from the University of Wisconsin-River Falls and his MFA degree in ceramics from Cranbrook Academy of Art, Bloomfield Hills, Michigan. He has received an NEA individual artist fellowship, six artist fellowships from the Illinois Arts Council, as well as residencies at the Archie Bray Foundation in Helena, Montana (1996), and the Red Lodge Clay Center, Montana (2010, 2012, 2014). His work is represented by galleries across the country, and found in numerous private and public collections around the world. An avid wood firing enthusiast, Anderson fires his ceramic works in an anagama wood kiln at his Old Poag Road Clay & Glass studio/home in rural Edwardsville, Illinois. 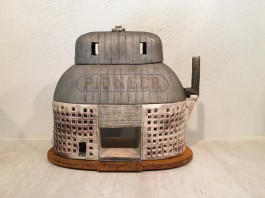