Walter Gropius and the Huntington Galleries Building Expansion Project Exhibition Supported, in part, by a Gift from the Saint John's Trust

Through an exhibition of photographs, documents and drawings, the story of the involvement of great Bauhaus architect Walter Gropius with the Huntington Museum of Art will be presented this fall as a commemorative tribute on the 50th anniversary of the opening of the expanded facility.

Walter Gropius and the Huntington Galleries Building Expansion Project exhibition will be on view at the Huntington Museum of Art from October 10, 2020, through February 17, 2021.

On October 23, 1970, the Huntington Galleries (now Huntington Museum of Art) opened an addition to its facility that greatly expanded its exhibition space and added a 300-seat auditorium, a separate studio building and an art reference library. The building was designed by famed architect Walter Gropius and his colleagues at The Architects Collaborative.

How did it happen that a world-famous architect came to Huntington to work on an expansion of the museum? The story began in 1966 with the award of a major grant from the Henry L. and Grace Rardin Doherty Foundation that was earmarked for the building project. The leader of the Doherty Foundation at the time of the grant was Walter L. Brown, whose father, Douglas W. Brown, had been a partner with museum founder Herbert Fitzpatrick in the Huntington law firm Fitzpatrick, Brown and Davis.

A committee that was appointed by the Museum’s Board of Trustees to find an architect for the project was frustrated by their inability to attract a prestigious firm to head the effort. The answer to the dilemma finally came about through the efforts of Eloise Campbell Long, a member of the Huntington Galleries Board. She and her husband were regular vacationers at Castle Hot Springs, a resort in Arizona, a place that was also frequented by Walter Gropius and his wife Ise. Mrs. Long had become friends with the couple during their many visits to the resort, and when the museum’s expansion project was announced, she audaciously asked Walter Gropius if he would undertake the design of the new wing in Huntington. Much to her pleasant surprise, he agreed to take on the project in partnership with his firm, The Architects Collaborative of Cambridge, Massachusetts.

Though Gropius passed away before the Huntington project was completed, his influence had a major impact on the museum, not just in terms of the building, but also in his emphasis on a studio-based art education program. At the groundbreaking ceremony in 1968, he outlined a vision for the new facility.  “It will be of incalculable value for Huntington and its neighboring towns to have at their disposal a greatly broadened institute…to pursue both the improvement of the historic knowledge of art as well as the artistic creativity of their own young generation for the cultural benefit of the whole community.”  He emphasized the importance of art instruction in the studios, expressing a desire “that such activities may flourish here under the stimulation of talented teachers and of great examples of works of art exhibited in this gallery.”

This exhibition is supported, in part, by a gift from the Saint John’s Trust, in Memory of Anna Virginia Morgan. 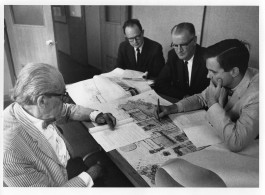 Walter Gropius discusses the plans for the addition to the Huntington Galleries. Photo from HMA Archives.