Vietnam: The Real War, Photographs from The Associated Press

The Huntington Museum of Art will host the exhibition titled Vietnam: The Real War, Photographs from The Associated Press from Oct. 22, 2022, through Feb. 12, 2023.

In addition to the exhibition, HMA will present the award-winning documentary Vietnam: West Virginians Remember on Nov. 22, 2022, at 7 p.m. Admission is free to this 4th Tuesday Tour event. Documentary
shown with permission of West Virginia Public Broadcasting.

“Vietnam: The Real War features images taken by unbelievably courageous photojournalists,” said John Farley, HMA Senior Curator / Exhibition Designer. “West Virginians have a proud history of stepping up to serve the United States military, and we are dedicating HMA’s presentation of this exhibition to all West Virginians who have served our country through military service.”

This exhibit is organized by the Huntsville Museum of Art, Huntsville, Alabama, and The Associated Press, New York, New York.

Many photographs in this exhibition are graphic, and parental discretion is strongly recommended.

Gallery walk speakers Johnson and White will discuss individual photographs in the exhibition and take questions from those attending at the end of the gallery walk on Oct. 21.

Johnson is a U.S. Army veteran, who served in Vietnam with the 135th Assault Helicopter Co. from 1971 until 1972. He attended Cabell County public schools and graduated from Marshall University in 1982 with a bachelor’s degree in journalism. He spent 33 years with Gannett Co. Inc. newspapers as a reporter, assistant city editor, sports editor, and managing editor for The Herald-Dispatch in Huntington; executive editor in Fremont and Port Clinton, Ohio; executive editor in Gainesville, Ga.; managing editor in Pensacola, Fla.; and executive editor and general manager in Richmond, Ind. He retired in 2013. He and his
wife, Sheila Dawn Johnson, are the parents of adult twin sons, Travis and Justin. Mickey and Fran Allred, another former managing editor of The Herald-Dispatch, are the co-owners of We Edit Books (weeditbooks.com), a manuscript editing service based in Huntington.

Dr. White is a History Professor at Marshall University. He earned his Ph.D. at the University of Kansas in 2005 specializing in Latin America and U.S. Foreign Policy. He has taught a course at Marshall on the Vietnam War for the past 10 years, and was an advisor for the West Virginia Public Broadcasting documentary, Vietnam: West Virginians Remember, which aired in 2017. He also served in the Marine Corps Infantry from 1994-1998, at various locations around the world. He met his wife, who served in the Navy, on the Indian Ocean island of Diego Garcia. Dr. White and his family have lived in the Huntington area since 2006, when he started teaching at Marshall.

This exhibit is supported in part by Valley Health Systems, Inc.

For more information on exhibits at the Huntington Museum of Art, visit hmoa.org or call (304) 529-2701. HMA is fully accessible.

About the Huntsville Museum of Art

The Huntsville Museum of Art is a non-profit municipal corporation established by the City of Huntsville, Alabama, and governed by a city-appointed Museum Board. The Museum seeks to foster understanding of the visual arts and appreciation of artistic achievement. In addition to its galleries and exhibitions, the Museum offers art classes for children and adults along with special programs, lectures and musical presentations. Rental space is also available for weddings, meetings and other events.

About The Associated Press

The Associated Press is the essential global news network, delivering fast, unbiased news from every corner of the world to all media platforms and formats. Founded in 1846, AP today is the most trusted source of
independent news and information. On any given day, more than half the world’s population sees news from AP. On the web: www.ap.org. 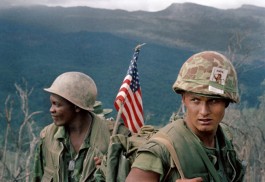 Copyright The Associated Press, for promotional use only in relation to the 2022-2023 exhibition “Vietnam: The Real War,” at the Huntington Museum of Art.