Through the Eyes of Honoré Daumier: Lithographs from the Permanent Collection

Honoré Daumier (1808-1879) was a French artist renowned as a brilliant caricaturist with boundless imagination. For most of the artist’s life, he earned a living producing sharp-witted cartoons and provocative caricatures that satirized his countrymen.

Published in newspapers, periodicals, journals, and illustrated pamphlets, these striking images, often pointed and uncompromising, offer commentary on 19th century France – a time of social, cultural, and political upheaval. From the July Revolution of 1830 and the ascendance of the upper middle class, or bourgeoisie, to the fall of the Second Napoleonic Empire in 1870, Daumier’s images engaged the French populace through the weekly press.

He was politically aligned with the working class, in antagonistic opposition to the French constitutional monarchy and those who profited from it. His convictions occasionally lead to retribution and censorship. Early in Daumier’s career he was charged, fined, and briefly imprisoned for a scathing caricature that depicted an indolent French King Louis Phillippe gobbling bags of coins extracted from the nation’s workers – many of whom lived in miserable poverty.

Honoré Daumier mastered the recently invented lithographic printmaking process, a faster and less expensive method of mass-producing prints compared to the traditional practices of engraving and etching. He was prolific and drew 3,958 lithographs before the onset of blindness halted his work. Despite his reputation for acerbic political statements, many of these prints were lighthearted satires of contemporary life in industrialized French society.

Through the Eyes of Honoré Daumier will present selections from the Huntington Museum of Art’s impressive collection of lithographs by this influential artist, most of them gifts of the Armand Hammer Foundation. Although these works reflect the culture of a particular country and era through the eyes of one keen citizen, Daumier’s astute observations about humanity echo into the present. 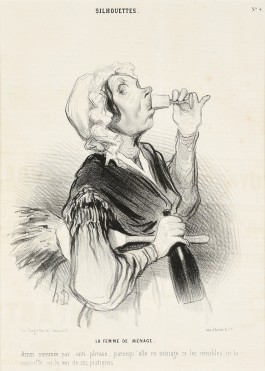