This Land is Your Land: Art and the American Experience

The wide expanse of the United States, from “California to the New York Island,” as Woody Guthrie penned in his famous anthem, carries with it an imposing history that includes stories of heroism and tragedy, prosperity and poverty, freedom and enslavement, tradition and upheaval, and war and peace.

The complex fabric of the nation is woven with millions of individual experiences that have spawned a material culture that reflects the varied backgrounds and contributions of people who have inhabited the land. From strictly utilitarian objects to luxurious objets d’art that were obtainable by only a small percentage of the populace, each item reflects upon the larger culture and values of American society.

Beginning with a look at objects from the indigenous cultures that existed before European contact, the show moves forward in time to the settlement of the land by immigrants from other nations. Portraiture provided an important record of the faces of those who could either afford such a luxury or had interesting stories to tell, ranging from one of the earliest portraits done of European settlers in the New World, A Portrait of Henry Gibbs, by Freake-Gibbs Limner, on loan from the Juliet Art Museum in Charleston, West Virginia, to multiple images of Native American subjects by artists such as George Catlin and Charles Bird King. The flora and fauna of the American lands were fascinating to both European and native-born artists, so representative works that highlight the natural history of the land will be included. The rugged and often pristine beauty of the growing nation will be showcased in numerous scenic landscapes.

As settlement of the land increased, a thriving demand for decorative items grew in proportion. Items for homes ranging from utilitarian woven goods and stoneware to luxurious furniture and finely engraved tableware were made for the growing class of consumers. Glass, pottery, quilts, furniture and metalwork will be displayed, highlighting the strong craft traditions that drew inspiration from the melting pot of cultures in the developing nation. Various means of traversing the land will be a point of emphasis, from images of early carriages, ships and locomotives to modern-day vehicles.

Efforts to forge a national identity will be presented through images of near-mythical heroes and symbols ranging from the log cabin to historical figures such as George Washington and Daniel Boone. The constant specter of conflict, whether with outside foes or those within the same society is represented through the work of artists and designers as they addressed military and political struggles from the Revolutionary period onward.

Drawn primarily from the HMA permanent collection, the show will look at the American experience through the nation’s artistic output. Well-known artists will be featured alongside anonymous designers, folk artists and craftsmen, highlighting the intense creative spirit that has permeated the American land for centuries. 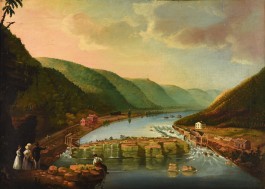