The Wide Reach of the Bauhaus Exhibition Supported, in part, by a Gift from the Saint John's Trust

To commemorate the 50th anniversary of the opening of the 1970 addition to the Huntington Museum of Art that was designed by Walter Gropius and his partners at The Architects Collaborative, the museum is planning an exhibition on the Bauhaus, the highly influential school that Gropius founded in Weimar, Germany, in 1919.

Titled The Wide Reach of the Bauhaus, this exhibition will focus on the penetrating influence of the school and its students and teachers throughout the world. Many of these remarkable artists were forced to scatter from Germany to escape a government that was hostile to modernist art and design, so they took their ideas to communities around the globe, even to small and unlikely places such as Aspen, Colorado, and Black Mountain, North Carolina.

The Wide Reach of the Bauhaus will look at the incredible impact of the individuals who were associated with the school. It will feature work that was created during the Bauhaus years of 1919-1933 as well as later work by the artists, architects and designers who moved on to successful careers in the United States and elsewhere. Many of the leading figures in 20th century art and design will be featured, including Gropius, Josef Albers, Anni Albers, Wassily Kandinsky, Paul Klee, Marcel Breuer, Mies van der Rohe, Lyonel Feininger, Herbert Bayer, and Laszlo Moholy-Nagy. The exhibition will include paintings, prints, film, photography, graphic design and drawings, as well as decorative arts such as pottery, furniture and textiles, and will include an emphasis on the school and its colossal influence upon 20th century architectural design.

From its earliest days of existence, the Bauhaus pursued a new approach to art, one that looked forward rather than to the past. It was committed to erase the gulf between “fine art” and “craft” and embraced the potential of modern machine technology to make good design available and affordable to the masses. Though students at the Bauhaus followed a structured course that emphasized basic studies in color and form followed by hands-on experiences with various materials such as clay, wood, metal, glass and textiles, they were encouraged to experiment to create work that broke new ground. Despite being caught up in political controversies and faced with constant financial problems during the turbulent times that gripped Germany in the years following World War I, the school produced a host of individual artists whose work stands out prominently in the history of 20th century art. Many would go on to serve as teachers in prestigious universities around the world such as Harvard and Yale or were involved in experimental and influential educational projects at institutions such as Black Mountain College in North Carolina or the New Bauhaus in Chicago.

Each of the artists has a story to tell, from the tragic but courageous work of former Bauhaus student Friedl Dicker-Brandeis, who taught children’s art classes in the concentration camp at Terezin (Poland) before being murdered by the Nazis in the Auschwitz-Birkenau camp, to American emigres Walter Gropius, Josef and Anni Albers, Marcel Breuer, Herbert Bayer and Werner Drewes, all of whom enjoyed long and successful careers in their adopted land. Many of the works in the exhibit are drawn from the growing number of Bauhaus items in the HMA holdings, while others have been borrowed from public and private collections.

This exhibition is supported, in part, by a gift from the Saint John’s Trust, in Memory of Anna Virginia Morgan. 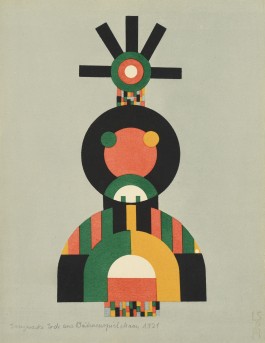