The exhibit titled The Visual Elements: Shape & Form Presented by Garth’s Auctioneers & Appraisers will be on view at the Huntington Museum of Art from Nov. 19, 2022, through Feb. 12, 2023.

This is the second in a two-year series of exhibits focusing on the basic elements of art.

Works in this exhibit include the screen print on paper titled Mutability by Don Pendleton and the pastel on paper work titled Bottles by the late Winslow Anderson.

“I am hoping that visitors are beginning to make connections between artworks that at first glance seem to have very little in common,” said John Farley, HMA Senior Curator / Exhibition Designer. “One goal of this two-year series of exhibitions is to help visitors see the commonalities in artworks of various styles since artists all create using the same basic principles of art.”

The first exhibit in this series titled The Visual Elements: Line Presented by Edward Tucker Architects, Inc. focused on what is considered the simplest and most versatile art element. This second exhibit will highlight shape, which is defined as space that is flat and enclosed and most often defined by lines. Form is considered the three-dimensional equivalent of space. 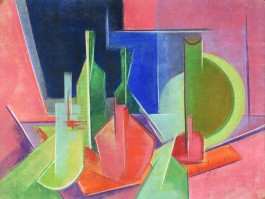