This exhibit will be the focus of the July Tuesday Tour, which will have a disco theme on July 23 at 7 p.m. A steamroller print demonstration is scheduled for June 14 and 15 with more details to be announced soon. This exhibit will be accompanied by a catalogue.

America was a changed nation by the time peace treaties were signed to end World War II. The successful military, technological and industrial accomplishments that were achieved during the war elevated the nation to a place of unprecedented international prominence. This push toward world leadership affected many areas of American culture, including the arts. For the first time in its history, American artists found themselves to be trendsetters rather than followers, as movements such as Abstract Expressionism emerged from studios and galleries in New York and other cities and were held up as the wave of the future throughout the world. This pacesetting role continued through the remaining decades of the century, as a parade of widely varying styles gained footholds in the American art scene, ranging from Pop Art to large-scale environmental works.

The Huntington Museum of Art has a strong collection of works by American artists from the period that runs the gamut of mediums and style, and many of these works will be showcased in an exhibition that will be on view from June 15 through August 25, 2019.


The earliest example in the exhibit will be a newly acquired work by modernist sculptor Chaim Gross that was completed in 1942. The show also includes works by important abstract painters such as Robert Motherwell, Franz Kline, Cy Twombly, Frank Stella and Helen Frankenthaler. The free-ranging styles that emerged during the 1960s are represented by iconic figures such as Andy Warhol, Roy Lichtenstein, Robert Rauschenberg, Romare Bearden and Jasper Johns. From the 1970s to the end of the century, artists such as Jim Dine, Keith Haring, Chuck Close and John Baldessari pushed the boundaries of painting and printmaking. The successful emergence of American women artists during the latter half of the century can be seen in works by Judy Pfaff, Alice Neel, Kiki Smith, Lee Bontecou, Miriam Schapiro, Marisol and Carrie Mae Weems. Innovative sculpture by Alexander Calder, Harvey Littleton, Beverly Pepper and Harry Bertoia will also be on view. Thanks to the sponsorship of the Richard C. von Hess Foundation, the exhibition will be accompanied by a full-color catalogue
of the works in the show.

This exhibit is presented by the Richard C. von Hess Foundation. 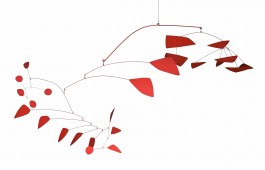