The Herald-Dispatch Presents WHAAM!: Original Comic Drawings from the Collection

The opening reception for this exhibit takes place during the Fourth Tuesday Tour on July 28, 2015, at 7 p.m. Beau Smith will be the guest speaker for the event. Admission is free. Refreshments will be served.

Once a uniquely American form of visual communication, the modern comic book and the dynamic cast of heroes and villains spawned within its pages are enjoying a meteoric worldwide renaissance.

While some printed media struggle to find readers, sales of comic books are peaking at their highest levels in two decades; scores of commercially successful and critically acclaimed comic book-inspired movies populate the box office; college students wear superheroes on university-licensed T-shirts to show school spirit; and the original artwork for newspaper comic strips and comic books has become a prized collectible exhibited by major museums around the globe. 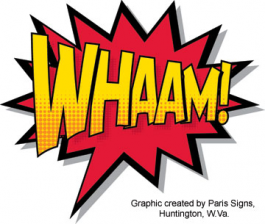