Between 1916 and 1965, Philippi, West Virginia, natives Arthur Spencer Dayton (1887-1948) and Ruth Woods Dayton (1894-1978) carefully developed a superb collection of American and European paintings, prints, sculpture, and decorative arts that speaks to their personal philosophy of beauty in art.

The couple began seriously building their collection during their years in Charleston (1923-1948). They purchased works from art galleries and, over the years, built a special relationship with MacBeth Gallery in New York City. They also bought from auctions, from prestigious exhibitions such as the Carnegie International, and purchased works directly from the studios of artists whom they admired – both in the United States and abroad. The Daytons bought what they liked and what they could afford. They also kept a detailed and valuable record of where and when objects were acquired.

They were well read on the history of art, especially 19th and 20th century American artists, sharing a love of landscapes. The strength of their collection lies in academically trained artists working in the various schools of realism and American impressionism, including masterpieces by Childe Hassam, J. Alden Weir, Emil Carlsen, John Twachtman, Willard Metcalf, Frank Benson, Charles Davis and works by “The Eight.” Early American modernists and the ideals expressed by those artworks were of little interest.

In 1929, Ruth purchased from MacBeth Gallery an etching titled Calvary Church in Snow by Childe Hassam and gave it to Arthur as a Christmas gift. Thus, began a collection of engravings, etchings, and lithographs by a literal “who’s who” of American and European printmakers. The Daytons also had a penchant for small bronzes, especially by women artists working in the late 19th and early 20th centuries, including Grace Helen Talbot, Harriet Frishmuth, Anna Hyatt Huntington, and Edith Parsons. A small collection of Lacy period glass was also part of the collection.

In May 1948, Arthur Dayton died suddenly at the age of sixty-one. With the goal of sharing the collection with the public, Ruth Dayton turned a building on the property adjacent to their home in Lewisburg, West Virginia, into a museum. She called it The Daywood Gallery, combining Arthur’s surname (Dayton) and her maiden name (Woods). The collection continued to grow through purchases and donations. The Daywood Gallery remained in operation from 1951 into 1966. The following year The Daywood Collection was donated to the Huntington Museum of Art. 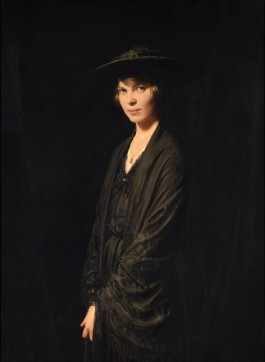