The Daytons had entered the collecting world in 1916 when they received a gift of the painting Munich Landscape, by Ross Sterling Turner, as a wedding present. That would be the beginning of a collection that would eventually number more than 200 works of art, including more than 80 paintings.

Many of the works are modest in size, deliberately chosen to fit comfortably in their Charleston, West Virginia, residence. The collection includes many of the great names in 19th and 20th century American art, such as Childe Hassam, Edward Hopper, Andrew Wyeth, Winslow Homer and others, as well as stellar examples of European art including Henri Le Sidaner’s Window on the Bay of Villefranche, the First Prize winner in the prestigious 1925 Carnegie International Exhibition.

Though 40 of the Daywood paintings will be away from Huntington in a national touring exhibit, the HMA presentation of the collection will include many favorites such as Joyce by Howard Somerville, and Childe Hassam’s stellar work from his famed “flag” series, Lincoln’s Birthday Flags, 1918. The show will also highlight the rich and deep collection of drawings and prints that was assembled by the Daytons, with works ranging from prints by old masters such as Rembrandt to later examples by John Singer Sargent, James McNeill Whistler, Martin Lewis and Thomas Wilmer Dewing.

When she gave the collection to the Huntington Museum of Art, Ruth Dayton expressed a great deal of personal satisfaction in knowing that it was going to be cared for and displayed in a proper manner, remarking that “the Daywood Collection will always have a home in West Virginia and will continue, through the years, to bring pleasure to art lovers in the State as well as to visitors from throughout the nation.”

As we celebrate the 50th anniversary of the addition to the Huntington Museum of Art facility that made the gift possible, the display of The Daywood Collection stands as a fitting tribute to the Daytons and their extraordinary legacy. 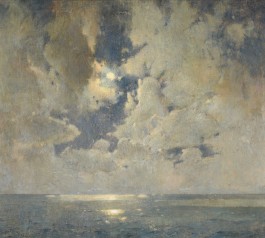