This exhibit will be in the spotlight during the November Tuesday Tour on November 27, 2018, at 7 p.m. This is a Macy’s Free Tuesday event.

Some of the artists represented in the exhibit include Childe Hassam, Gari Melchers, Frank W. Benson, Robert Henri and Howard Somerville, whose painting Joyce is one of the most beloved by Museum Members in HMA’s permanent collection of more than 15,000 objects. 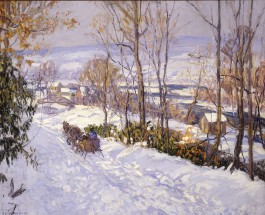