Some of the artists represented in the exhibit include Childe Hassam, Gari Melchers, Frank W. Benson, Robert Henri and Howard Somerville, whose painting “Joyce” is one of the most beloved by Museum Members in HMA’s permanent collection of more than 15,000 objects.

“When these amazing works of art come out of the vault and go up on exhibit here at the Huntington Museum of Art, it is truly like visiting with old friends again,” said HMA Senior Curator Chris Hatten. “We know that longtime supporters of HMA are very familiar with these works and are happy when they go on view, but we look forward to new visitors seeing these masterpieces for the first time as well.”

Born in Phillippi, W.Va., in 1887, Arthur S. Dayton’s father was an attorney, judge and U.S. Congressman. Arthur Dayton earned a law degree at West Virginia University in 1908. He went on to attend Yale and receive a Master’s degree there. He was an avid collector of not only art but also rare books, including Mark Twain first editions and Shakespeare folios among several other Elizabethan-period works.

Also from Phillippi, Ruth Woods Dayton was born there in 1894 and attended what would later become Greenbrier College and earned a certificate from the New York School of Interior Design. She married Arthur S. Dayton on June 14, 1916, and wrote articles and books about early West Virginia settlers. After her husband passed away in 1948, Mrs. Dayton would later give her husband’s legal library to the West Virginia University Law Library and his rare book collection to the West Virginia University Library.

The works of art that were eventually gifted to the Huntington Museum of Art were shown beginning in 1951 in a Lewisburg building known as The Daywood Art Gallery, Inc., which was a nonprofit organization. 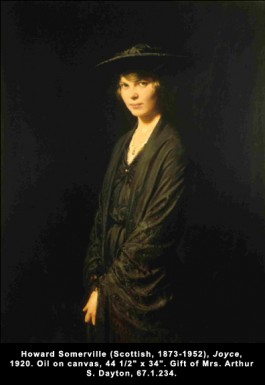