The Beauty of the Familiar: Realism and Naturalism in France and the United States

The 19th century was a tumultuous time in Europe, both in terms of political events and in cultural matters. France was especially affected, as the turmoil it had experienced in the previous century continued to stir in the ensuing years through periods of warfare and toppled regimes. The call for change that rang throughout French society also had an impact on the arts, as the established hierarchy of the official Salon and the academies began to crumble, and a more democratic system evolved.

Leading the call for change were painters such as Gustave Courbet and Jean-Francois Millet, whose paintings of peasants and farm laborers brought a challenge to the rigidly prescribed academic styles that were prevalent. A new set of values began to emerge, as artists sought out the humble and familiar, especially in their choice of subjects for landscape paintings. This new aesthetic philosophy emphasized local scenery such as that found in the Forest of Fontainebleau and the small farming village of Barbizon that stood at its edge. No longer was it necessary to emphasize heroic or ideal subjects; now artists could take a train or boat into the countryside and find a wealth of inviting subject matter. This sensibility was also echoed in other aspects of French culture, such as in influential literary works by the novelist Emile Zola, whose settings were often in the villages of rural France.

Two closely related styles that were prevalent during the period were realism and naturalism. Realism focused upon the common people and their surroundings, while naturalism stressed faithful observation, especially in depicting the landscape. Each rejected the artificiality of the prevailing academic styles and paved the way for modernist movements such as impressionism, which emphasized painting directly from nature. Because France was the epicenter for artistic taste and study, the developments there quickly spread to other cultures, including America. Artists such as George Inness, Daniel Ridgway Knight and Gari Melchers gathered ideas from their French counterparts and brought them to the United States through their work.

The Beauty of the Familiar will emphasize examples of French and American painting that embrace the ideas of realism and naturalism. Many of the paintings in the exhibition were gifts of Herbert Fitzpatrick, whose efforts led to the founding of the Huntington Museum of Art in the late 1940s. 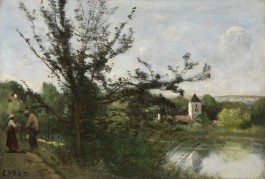