The Artistic Legacy of the Sarah Wheeler Charitable Trust

The Huntington Museum of Art has enjoyed a rich history during its lifespan of nearly seven decades, thanks in large part to the wide support it has received from the local community. In addition to the generous gifts of land and art that were made by museum founder Herbert Fitzpatrick before its opening in 1952, there have been a multitude of supporters who have stepped up to provide financial assistance and make gifts of artwork to the museum. One of the most impactful gifts in terms of the museum’s collection has been the Sarah Wheeler Charitable Trust, which provides funds for art purchases in memory of Sarah Slack Wheeler and her husband, Steve Wheeler.

Sarah Wheeler was born in Huntington in 1917, the daughter of Elizabeth and Frank Slack. She led an adventurous life, especially after her marriage to Steve Wheeler, whose work as a mining engineer took the couple on travels around the world. They lived overseas for lengthy periods of time, with extended residential stays in Paris, Venice, Monaco and Beirut. Her travels gave her access to a wide range of cultural experiences, including visits to some of the world’s most important museums.

Both Steve and Sarah were practicing artists as well, so the arts were deeply ingrained in their lives. The couple lived out their retirement years in Huntington, where members of Sarah’s extended family still resided. Following Steve’s passing, Sarah made plans to establish a trust to support three institutions that she felt were vital to the well-being of Huntington: Marshall University, the Cabell County Public Library, and the Huntington Museum of Art. The museum’s funds are dedicated to the purchase of paintings that were created in the year 1940 and earlier.

Among the key works that have been purchased with the funds include paintings by Jean-Baptiste-Camille Corot, Thomas Doughty, Henry Ossawa Tanner, Guy Wiggins, Edith Wilkinson, Blanche Lazzell, Thomas Hart Benton, and John Frederick Peto. A selection of the works purchased with funds from the Wheeler bequest will be showcased in the Museum’s Switzer Gallery, a space that was named in honor of former Huntington Mayor Rufus Switzer, whose own trust has provided key funds for the operation of the Museum since its founding. 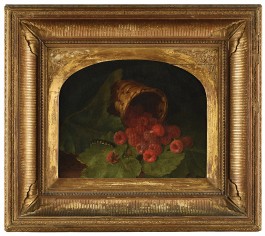