“Those who labor in the earth are the chosen people of God,” Thomas Jefferson wrote in 1787, expressing his belief that the workers who till the soil would be the unshakable foundation of the newly formed United States of America.

Serving as symbols of self-reliance and dignity, workers, particularly farm laborers, found their way onto the sketchbooks and canvases of artists, especially as the 19th century unfolded and the rise of factory production radically changed the work experience for many people. Some artists such as Gustave Courbet and Jean Francois Millet used the image of the worker to express strong political views, while others chose to present a more nostalgic sentiment that mourned the decline of the agricultural economy and a vanishing way of life. By the beginning of the 20th century a philosophy of realism was firmly entrenched, giving rise to depictions of even the most unglamorous jobs, from street sweepers to barmaids.

The selection of artworks in this exhibition from the Huntington Museum of Art collection ranges from 19th century depictions of agricultural laborers to modern-day images of coal miners and quarrymen at work. A variety of mediums will be presented, including paintings, prints, sculpture and photographs. 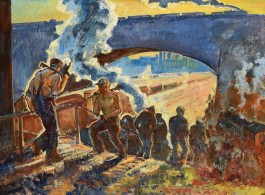