Illustrated storytelling is a primal form of human communication, believed integral to the development of language. In this sense, the visual and narrative styles beloved in contemporary culture as comic art are simply modern expressions of a collective impulse buried deep in our prehistoric past.

Nearer the present, comic art represents a natural evolution of the political cartoons and satirical caricatures which have been printed in European and American newspapers and periodicals since the early 1800s. Cleverly designed interplays of text and image allowed for effective communication with a wide audience, regardless of age or literacy, making this format ideal for delivering social critique, propaganda, and entertainment. Published compilations of cartoon reprints and newspaper comic strips foreshadowed what was to come and, in 1935, the first comic book featuring original cartoon artwork was released. However, the Golden Age of Comic Books truly began in 1938 with Action Comics, no. 1, when an extraterrestrial infant refugee with superhuman potential crash landed in the idyllic American Midwest. The boy’s adopted parents named him Clark Kent, but humanity came to know this archetypal superhero, champion of the oppressed, by his alter-ego: Superman. By the mid-20th century, in addition to a growing number of mainstream comic creators, diverse independent artists, writers, and publishers were producing self-expressive comic art that commented on culture and politics from new perspectives. Barriers continue to be transformed into frontiers for creativity as artists and writers who once had limited voices in the traditional comic industry now enjoy a wider audience and larger platforms to tell their stories.

Once primarily an American art form, comic books and the pantheon of characters spawned within their pages now connect legions of devoted fans around the world through a common language. Comic sales have risen consistently for decades, and consumer demand continues to reach astonishing heights, a trend supercharged by the popularity of graphic novels and digital downloads. Free Comic Book Day – an annual promotional effort supported by participating comic book vendors – has spread to nearly sixty different countries. An undeniable pop-culture juggernaut, scores of commercially successful comic-inspired movies dominate at the box office, and critically acclaimed TV series stream directly into our living rooms. The original artwork for newspaper comic strips and comic books is coveted by collectors and exhibited by major museums.

No longer a niche hobby, comic culture is decidedly mainstream. 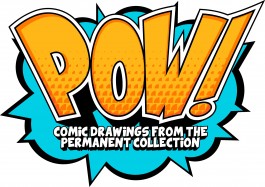