This exhibit will be highlighted during the 4th Tuesday Tour on February 26, 2019, at 7 p.m. This is a Macy’s Free Tuesday event.

For centuries, the colorful carpets that have been woven in Central Asia and the Near East have been featured in paintings by artists from western cultures. The most well-known examples are those by European painters such as Hans Holbein, Giovanni Bellini, Hans Memling and Jan van Eyck, whose depictions of the rugs are often important records of early weaving styles.

While the Huntington Museum of Art does not have the good fortune to own any of those iconic paintings, it does have several artworks that feature rugs from a variety of world cultures. The earliest of these is a still-life painting from the late 18th century by the Italian artist Bartolommeo Bettera, which features a prominently displayed rug that serves as a patterned foundation for a magnificent display of flowers.

Other works in the collection that utilize the complex patterns of woven textiles range from a painting by the Spanish Orientalist painter Clemint Pujol Gustavino that features a woman seated on a rug in an elaborate Middle Eastern courtyard to a contemporary photographic portrait by Bonnie Schiffman of the painter Richard Diebenkorn, who sits perched in a chair atop an Oriental rug with his pet beagle at his side.

Five aquatints by the artist Katja Oxman add another group of works from the collection that feature the intricate weavings of craftsmen from around the globe. Oxman pictures patterned textiles underneath collections of personal objects such as postcards, pet birds, houseplants, bowls of fruit, watches, books, and feathers. Her recent gifts to HMA will be shown for the first time in this exhibition.

Accompanying the group of prints, paintings and photographs in the exhibition will be a selection of Islamic prayer rugs from the museum’s collection. These rugs were among the featured works in the museum’s collection when it opened in 1952, a gift from museum founder Herbert Fitzpatrick. According to his associate Eddie Kyle, Fitzpatrick would “go to the ends of the earth” to pursue his passion for collecting rugs. His gift includes many fine examples from Turkey and the adjoining regions of the Caucasus, along with a small selection of Turkoman tribal rugs. 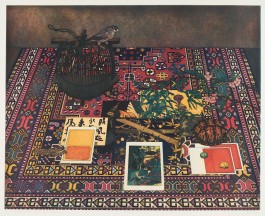