This exhibit will be in the spotlight during the January Tuesday Tour on January 28, 2020, at 7 p.m. This is a Macy’s Free Tuesday event.

The act of drawing is one of the key foundational elements of the visual arts. Virtually any attempt to create a finished work of art, from paintings to sculpture, typically begins with a sketch or preliminary drawing. For this reason, art students through the ages have spent countless hours drawing from a model or sketching in a studio setting as they prepared to move forward in their profession.

Drawings have been collected as independent works of art for centuries, though they were often relegated to secondary status because they were viewed as temporary or fragile. Even so, the drawings of masters such as Leonardo da Vinci, Michelangelo and Albrecht Durer have been prized among the great masterpieces of the artist’s craft.

While drawings are typically rendered with a pencil on paper, several other materials are also commonly used such as ink, crayon, charcoal and pastel. The history of the use of pastel (powdered pigment held together by a neutral binder in a manner similar to chalk) is a fascinating one. Long considered the stuff of amateurs, it was not until the 19th century that pastel began to command the consistent attention of leading artists and collectors. Championed by many of the impressionist artists such as Edgar Degas, Pierre Auguste Renoir, Mary Cassatt and Claude Monet, as well as James McNeill Whistler, the medium gradually grew in acceptance in the art world.

The Huntington Museum of Art has a rich collection of drawings in its holdings and they will be showcased in this exhibition. Works by leading American artists such as John Singer Sargent, George Bellows, John Twachtman, Thomas Dewing, Thomas Hart Benton and Everett Shinn are included in the exhibition, along with examples by more contemporary artists such as Wolf Kahn, Jack Beal, G. Daniel Massad and Jane Freilicher. Drawings by European masters such as Jean Francois Millet, Georges Braque, Marie Laurencin and Pablo Picasso will also be shown. 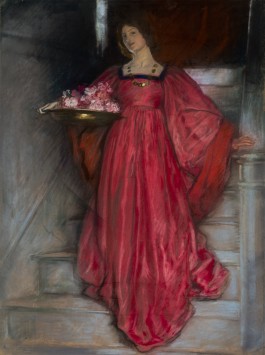