A free petting zoo will take place in conjunction with this exhibit on Saturday, July 27, 2019, from noon to 4 p.m. in the Daine Courtyard behind HMA.

For more than 40,000 years, artists of all cultures and over all areas of the world have depicted animals in many ways and for many different purposes. Man is himself an animal and has often seen aspects of himself in the creatures around him. By painting and sculpting them, he has continually expressed his connection to animals and to the fundamental natural world through his art.

In the ancient cultures of the Americas, Africa, and the Near East, animals in painting, sculpture, textiles and ceramics were often used in a religious or spiritual sense. Animal-shaped vessels from Pre-Columbian Peru might have had ritual purposes, the container having been created in the form of the animal whose spiritual properties one wished to imbibe, or whose parts served as the main ingredient of a healing elixir. Artists in North America and Africa created amulets and statuettes as talismans in the forms of animals like the hibernating bear, the frog, or the strange aardvark, who seem to exist between the visible upper world and the darker underworld. In
Mesopotamia and the Levant, many small personal objects have been found that may have been meant to call forth or indicate the possession of the special energies of certain beasts, such as the indomitable power of the bull or the regal bearing of the lion and the falcon.

In more recent times, artists have used animal imagery as straightforward presentations of unfamiliar life-forms, models of essential beauty, and expressions of personal and collective psychologies. In 1835, ornithologist John Gould published his “Monograph on the Ramphastidae, or family of toucans”, a 34-plate folio of images that would popularize what has become one of the most widely recognized birds in the world. In Japan, artists such as Ito Jakuchu and Shoson made woodblock prints of colorful birds, geese and peacocks, sometimes for the sublime beauty of their forms and sometimes for the humor of their quirky behavior. The surrealist Max Ernst believed himself to have been hatched from an egg laid by his mother and created many artworks under the inspiration of his alter-ego Loplop, “a superior of birds.” His etching Congregation of Birds could be viewed as a tangle of souls or a depiction of his own birth. The collection of the Huntington Museum of Art features a great number of works in which animals appear as symbols, subjects of scientific study, or simply as attractive targets of aesthetic regard. This exhibition offers a variety of these sculptures, paintings, drawings and prints that show that artists and their patrons everywhere have always been fascinated with animals and with what their images can tell us about our world and ourselves.

This exhibit is presented by Paris Signs. 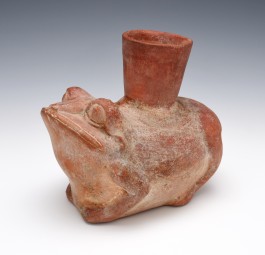