Join us for a tasting tour of the C. Fred Edwards Conservatory and a look at this exhibit on August 28, 2018, at 7 p.m. This 4th Tuesday Tour program includes a presentation by Dr. Mike Beck, HMA’s Conservatory Director, and a walk through the conservatory. This is a Macy’s Free Tuesday event.

The invention of the printing press spawned an amazing revolution in the dissemination of knowledge. With the advent of movable type, the ability to spread newly discovered information to a wide audience in the form of printed materials had a marked effect on nearly every aspect of human culture, from religion to politics, literature, and economic theory.

As the influence of the Enlightenment took hold in western cultures, its emphasis on direct observation of the natural world prompted a major shift in the study of botany, a scientific realm that had largely been consigned to herbalists and physicians. Travel to the amazing realms of the New World introduced a growing demand to see and experience the rich and exotic natural features of foreign lands.

By the 17th century, a thriving body of richly illustrated botanical literature had appeared. Books such as Basil Besler’s Hortus Eystettensis, published in 1613, were important not only for their contributions to the advancement of a system of botanical classification, but the clarity and beauty of their illustrations made them works of art that were prized by collectors.

Artists used a variety of printmaking techniques to create these images, beginning with woodcuts in the earliest works and later using etchings and lithography as those processes were perfected. Many of the illustrations were hand-colored, giving them a sumptuous look that made their subjects come to life. The advancement of printing techniques and an enthusiastic culture of exploration and scientific discovery led to a “golden age” of illustrated botanical literature, an era that would extend into the mid-19th century, when the invention of photography created a new means of documenting the natural world.

The Huntington Museum of Art has a rich collection of natural history prints in its holdings, including many that were donated by longtime patron Dr. Marion Korstanje. For this exhibition, a number of the works were chosen to illustrate features of the museum’s C. Fred Edwards Conservatory and nature trails, including prints that depict orchids, banana plants and butterflies. 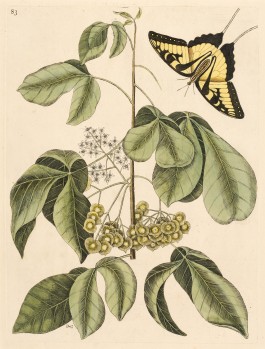