Please join us for a free opening reception for this exhibit on November 15, 2019, at 5 p.m. featuring a presentation by Marshall University Professor Jeff Ruff.

The Mamluks ruled much of the area around Syria-Palestine and Egypt from 1250 to 1517. Emerging from slave origins (mamluk is the Arabic word meaning “slave”), they created a powerful empire that repeatedly fended off invading enemies and established the area as a stable stronghold. Their reign saw a flourishing culture that brought with it a rich period of artistic patronage, resulting in a remarkable legacy of achievements in architecture as well as the visual and decorative arts. During the Mamluk period, Cairo established itself as the leading cultural center in the Arab Islamic world.

One of the most distinguished craft traditions that emerged during the Mamluk period was the production of magnificent engraved and inlaid metalwork. Applying gold, copper and silver to the surfaces of metal (usually brass) objects, the work featured elaborate Arabic calligraphic inscriptions and complex geometric and floral motifs. Metalworking centers flourished in Damascus and Cairo, and the work found its way into the collections of prosperous patrons in the region as well as in wealthy European households. Following the demise of the Mamluk sultans in the 16th century, new decorative styles emerged that reflected the culture of the ruling Ottoman Empire or European sources, effectively ending the stylistic era of the Mamluks.

By the late 19th century, new interest was shown in preserving the extant examples of metalwork from the Mamluk period. Many of these were acquired for The Museum of Arab Art that had been established in Cairo, and there was also a growing export market for these treasures to satisfy the wishes of collectors in Europe and the United States. Unable to fulfill the demands for these objects with examples from the actual Mamluk period, merchants began to employ skilled craftsmen in Cairo and Damascus to recreate similar objects, using examples in museums and private collections as guides. For several decades prior to World War I, there was an upsurge in the
production of finely crafted metal objects in the Mamluk style. The intricate craftsmanship demonstrated in these works reflects the long and proud history of metalworking in the area and highlights the complex beauty of flowing calligraphy and highly patterned decoration that emerged centuries ago.

For Dr. Joseph Touma, the desire to collect these objects reflects great pride in his Syrian heritage and brings back rich memories of his childhood in Damascus. “When I was 11 or 12 years old my family moved to the Touma ancestral home in the Christian quarter of the historic old city of Damascus. I was surrounded by artisans who were working in the authentic Damascene craft traditions. What fascinated me most was the metalwork. At that time most of the metalwork was done by Jewish and Christian artisans, who engraved and inlaid with silver brass trays and various other wares. These workshops were in the heart of the Jewish and Christian quarters where we lived. For seven years I observed with fascination the beauty and the complexity of their artwork. Fast forward to the 1980s, and my love for this art was awakened once more during our visits to Damascus while walking the narrow streets of the old city. To my surprise the workshops were still there, and the sounds of chiseling the brass and inlaying the silver had not changed. I bought a few pieces and began a 25-year quest to research and acquire exquisite pieces.” The exhibition will showcase some of the finest examples that Dr. Touma and his wife, Omayma, have collected over the years.

This exhibit is presented by Community Trust Bank. 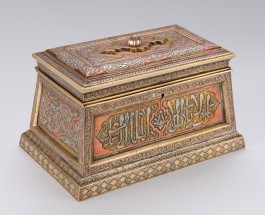