A fundraising event titled “It’s a Mod, Mod World” takes place on Friday, May 31, 2019, at HMA and offers a sneak peek at this exhibit and much more. (See Events page on this website for ticket information and event description.)

Opening reception takes place on Sunday, June 2, 2019, from 2 to 4 p.m. with a presentation by David Hausrath. This June 2 event is free to the public.

Charley Harper’s childhood on his family’s farm in Upshur County, West Virginia, left him with a strong love for the natural world as he observed the plant and animal life that inhabited the fields and forests that surrounded the property. Though never smitten with the urge to continue the family agricultural tradition, he would forever take with him this affinity for nature as he pursued a successful career as an artist.

After graduating from Buckhannon-Upshur High School and spending a brief time at West Virginia Wesleyan College, he journeyed to Cincinnati to pursue his longstanding dream of becoming an artist. He enrolled in the city’s Art Academy, where he found great inspiration in his studies and met his future wife in fellow student Edie McKee. His schooling was interrupted by his conscription into the Army during World War II, though he
remarkably continued to paint and sketch even during his combat duty. His artwork attracted notice from military personnel, who asked him to illustrate publications relating to wartime activities. Following the war, he returned to Cincinnati, where he finished his studies and began his long career as a professional illustrator and artist.

Harper’s signature style, which he playfully branded “minimal realism,” grew from his dissatisfaction with the mundane expectations of commercial illustration. “I began searching for something peculiarly me,” he said, “a style, a technique, a point of view – and gradually it emerged.” Landing a freelance assignment with Ford Times magazine, Harper utilized this newfound style and found that it was a hit with the public. The magazine offered
Harper’s prints for sale to its readers, and his work began to make its way into the national spotlight. He would enjoy a long career as a book illustrator, including an assignment to create the artwork for the landmark work The Giant Golden Book of Biology, a popular book for young readers, and was successful as a painter, printmaker and muralist.

The Huntington Museum of Art will offer a wide selection of Harper’s work, including many original paintings. These will be on view from June 1 through July 28, 2019, and are drawn from the collection of the Hausrath family. David Hausrath, retired Senior Vice-President and General Counsel for Ashland, Inc., lived in Ashland, Kentucky, for 18 years before the company moved to the Cincinnati area. His wife Debra worked at the Huntington Museum of Art for a brief period in the Education Department. David Hausrath’s interest in Harper’s work was kindled many years ago by its intriguing combination of art and nature, both of which are passions he enjoys. A few years after his retirement from Ashland, Inc., Hausrath, a longtime art collector, purchased Cincinnati Art Galleries, a successful commercial gallery in the Queen City.

This exhibit is presented by Macy’s. 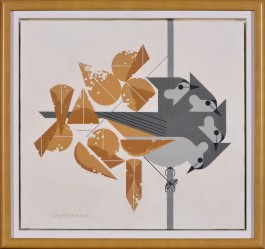