Since 1992, the Walter Gropius Master Artist Program has brought nationally and internationally known artists to the Huntington Museum of Art for workshops, lectures and exhibits. Legacy: The Walter Gropius Master Artist Program will exhibit contemporary work added to HMA’s Permanent Collection by artists who have participated in this innovative program for close to three decades.

The Walter Gropius Master Artist Program came about through a bequest from the estate of Roxanna Y. Booth, whose son, Alex, served on the museum’s Building Committee during the time of the expansion. At the groundbreaking ceremony in 1968, Walter Gropius outlined a vision for the new facility. “It will be of incalculable value for Huntington and its neighboring towns to have at their disposal a greatly broadened institute…to pursue both the improvement of the historic knowledge of art as well as the artistic creativity of their own young generation for the cultural benefit of the whole community.”  Gropius emphasized the importance of art instruction in the studios, expressing a desire “that such activities may flourish here under the stimulation of talented teachers and of great examples of works of art exhibited in this gallery.”

Alex Booth was extremely impressed with Walter Gropius and his educational philosophy and it was his hope that the museum could begin a program that would fulfill Walter Gropius’s vision for the new facility.

Beginning in 1992 with a month-long residency by American painter Robert Cottingham, the program evolved into a series of three-day workshops, each of which was accompanied by a public lecture by the artist and an exhibition of the artist’s work. In addition, through separate funding from sources such as the Donald B. Harper Endowment, the museum has made a commitment to purchasing work by each visiting artist for the permanent collection.

The list of artists who have visited is impressive and includes Philip Pearlstein, Alfred Leslie, Wolf Kahn, Beverly Pepper, Sandy Skoglund, Willie Cole, Miriam Schapiro and Jerry Uelsmann as well as three women who have been awarded “Genius” grants from the MacArthur Foundation – Carrie Mae Weems, Joyce Scott and Judy Pfaff. Many different media have been emphasized, though pottery has received special attention with instructors such as Warren MacKenzie, Val Cushing and Beth Cavener.

The Walter Gropius Master Artist Series is funded through the generosity of the Estate of Roxanna Y. Booth, who wished to assist in the development of an art education program in accordance with the proposals of Walter Gropius, who designed the Museum’s Gropius Addition, as well as the Gropius Studios. The Museum in indebted to Roxanna Y. Booth’s son, the late Alex Booth, Jr., for his participation in the concept development of the Gropius Master Artists Workshops. 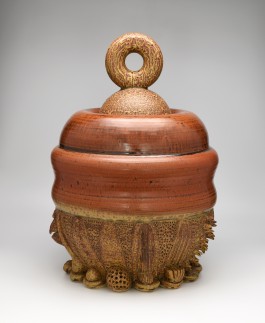