Generally understood as the North, Central and South American and Caribbean nations where languages derived from Latin – such as Spanish, Portuguese and French – are predominantly spoken, the concept of Latin America reflects the region’s shared colonial heritage.

Spanning two continents, the amalgam of geographic regions described as Latin America were wellsprings of sophisticated indigenous culture long before seafaring European explorers crossed the Atlantic Ocean. Pre-Columbian civilizations such as the Maya, Aztec, Inca, and others developed vibrant artistic practices over millennia. In the late 15th and early 16th centuries, Europeans arrived seeking new land and trading opportunities. For the next three centuries, Spanish, Portuguese and French interests colonized large parts of the Western Hemisphere and imposed European artistic conventions onto existing visual traditions. Millions of native inhabitants in Latin America were conquered or killed during this territorial expansion, succumbed to newly introduced diseases, or were brutally subjugated in the pursuit of natural resources. As this human toll inevitably dwindled the indigenous workforce, colonial powers satisfied the demand for free labor by forcibly importing millions of enslaved Africans to participate in military expeditions and work in the fields and mines. The men and women of this diaspora introduced their own unique visual language and contributed African cultural elements to the New World melting pot.

A revolutionary fire swept the region during the late 18th and early 19th centuries – stoked in part by the American and French revolutions – and the people of Latin America began fighting for independence from colonial rule. The Haitian Revolution, led by enslaved people and free people of color, saw France’s wealthiest colony, “The Pearl of the Antilles,” force the abolition of slavery and become the world’s first Black-led republic in 1804. This reverberated throughout the Americas. While many Latin American nations were decolonized within those first tumultuous decades of the 19th century, others did not gain independence until the 20th century, and some remain non-sovereign territories.

Although much of post-colonial Latin America has often been defined by inequality, internal strife and external intervention, a hopeful human spirit persists.

From the museum’s permanent collection, Latin American Roots will feature modern and contemporary artworks by a variety of artists whose Latin American heritage has allowed them a unique vantage point from which to interpret this history. From abstraction to political activism, the works express a range of aesthetic and personal concerns. This exhibit will examine overarching themes and highlight individual stories, reminding us that both measures are important in order to form a more complete understanding of those who hail from this complex, diverse region. 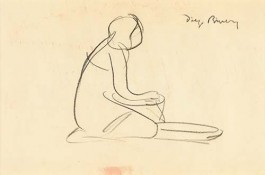