In Search of the Source: Paintings of the Nile and Beyond by Lockwood De Forest (1850-1932)

While primarily known today as a California impressionist painter, Lockwood De Forest (1850-1932) was one of hundreds of artists who made pilgrimages to the Middle East during the 19th century.

From December 1875 through July 1876 he traveled to the Middle East to paint the beautiful and historic landscapes that he would discover there. During the course of several months, he journeyed on the Nile, then up through Palestine, into Syria, including to Palmyra, and then off to Greece on his return home. In each location he sat down with brush in hand and painted exactly what he viewed with his own eyes on small, wooden panels. It is these paintings that will be featured beginning in winter 2017 at the Huntington Museum of Art.

Born in New York City to a prominent family, he traveled to Rome at the age of eighteen to take up studies with the Italian artist Hermann David Salomon Corrodi (1844–1905). While on that trip he made the acquaintance of the famous Hudson River School painter, Frederic Edwin Church (1826-1900) and upon his return to America, he worked in New York City where he exhibited regularly at the National Academy. Drawn by the moderate climate and beauty of the California coast, he began to winter in Santa Barbara in 1902 and in 1915 retired there permanently. While he would become known for his wonderfully colorful, impressionist oil sketches of California, the works from his tour of the Middle East instill a sense of piece that has eluded in the region in modern times.

What is especially interesting about his trip is De Forest’s diary observations have miraculously survived, allowing the viewer to get a better understanding of his time in the Middle East.

Early in his tour, which began in Egypt he noted while near E-Balyana – “The sky was of that partly cloudy, hazy kind, like so often we have at home in October, where the sunlight falls on the mountains – the color looking very much like our own after they have turned to that rich, golden orange hue.” By April of 1876 he was moving into Syria, where he commented on the Sea of Tiberias, better known today as the Sea of Galilee: “The Sea of Tiberias is by far the most picturesque place we have seen in Palestine or Syria. I should like to have stayed there a week but had to content myself with one day, and only had time to make a few hasty pencil sketches.”

But it was in May of that year that he and his retinue came to Palmyra – the famously historic city located in Syria that was so recently devastated. Following their arrival, De Forest commented on the exceptional architecture he witnessed: “We counted 350 Corinthian columns in perfect condition. They are all Corinthian, and mostly in groups from two to twenty… If you can imagine columns running off in perspective in all sorts of directions – sometimes with a distance of mountains like those in Egypt and at other times coming out from the top to base against the sky – you perhaps can form some dim idea of Palmyra.”

The exhibition at HMA will feature between 25 and 30 of these small yet extremely expressive works by De Forest, which demonstrate the rich, natural and built environment he encountered in the Middle East.

Sponsored by Drs. Joseph B. and Omayma Touma. 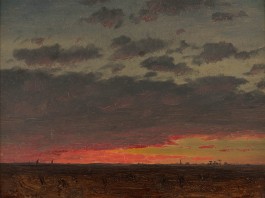