Saturday KidsArt will also feature a contest related to Lewis Carroll’s “Alice’s Adventures in Wonderland” on June 6 and June 13, with prizes presented on June 20 at 1 p.m. at the beginning of Saturday KidsArt, which is generously sponsored by Cabell Huntington Hospital.

In mid-January 2015 the New York Times published an article titled “A Girl Turns 150, and Fans Take Note.” This, of course, is referring to Alice, of Alice’s Adventures in Wonderland fame and 150 to the date since the well-known book Alice’s Adventures in Wonderland (1865) was written by Charles L. Dodgson, better known to the world as Lewis Carroll. The story of Alice’s Adventures in Wonderland has become part of everyone’s collective memory—through books, movies, music, or allusions to characters and places in the book (i.e. down the rabbit hole, the Mad Hatter, Cheshire Cat grin, etc.), yet most of us do not know much about the back story of Alice and the man who brought her adventures to life. The Lewis Carroll Society of North America (LCSNA), a non-profit organization dedicated to furthering study of the life and works of Carroll, is planning major celebratory exhibitions and programs across the United States to commemorate this Alice 150 event.

Locally, we will be celebrating this important sesquicentennial by presenting a selection of objects from the more than 3,500 items that make up the Lewis Carroll Collection of Victoria J. Sewell. Husband and wife team, Victoria and Byron Sewell, of Hurricane, W.Va., have spent the past 25 years building an extensive Lewis Carroll collection. The exhibit, curated by the Sewells, will include first edition and signed books, original drawings, playbills, and photographs, Alice books illustrated by various English and American illustrators, Alice books in translation and as illustrated by various illustrators around the world, parodies of Alice’s Adventures in Wonderland, Alice in the performing arts including dance, theatrical performances, movies and music, and much more.

The exhibition will be accompanied by an annotated catalogue from Evertype which will feature an introductory essay by Dodgson biographer Edward Wakeling, who recently published a book titled Lewis Carroll: The Man and His Circle, and prefaced by the Sewells. A muchness of programming is planned in conjunction with the exhibit, including a Mad Hatter Tea Party! You can follow other Alice 150 events at lewiscarrollresources.net, or on Facebook: Alice 150: Celebrating Wonderland. For information on a free download of “Alice’s Adventures in Wonderland,” click here 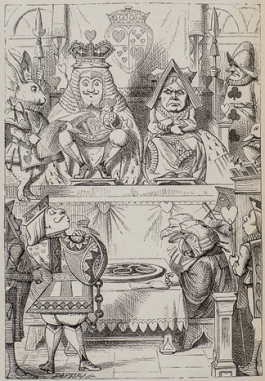