Garth’s Auctioneers & Appraisers Presents The Art of the Still Life

The long tradition of the artistic still life dates to ancient times in Egypt and the classical worlds of Greece and Rome, as depictions of tabletop arrangements of food and other objects have been found in Egyptian tombs, on Greek vases, and in mosaics and wall paintings unearthed in Pompeii. The genre began to thrive during the Renaissance, especially in northern Europe where Dutch and Flemish painters excelled in producing ultra-realistic depictions of inanimate objects such as flowers, dead game, food and wine, kitchen utensils and glassware. Though relegated to the lowest levels of importance by the European academic hierarchies who valued more lofty and esoteric subject matter, still life paintings were popular with art buyers and sold well.

The still life genre was even embraced by the iconoclastic painters of the 19th and 20th centuries in spite of its firm roots in tradition and has been a continuing theme in American painting.

The Huntington Museum of Art will display a wide-ranging group of still-life works from its collection, including a sumptuous painting by 17th century Italian painter Bartolommeo Bettera, a pastel drawing by Cubist master Georges Braque, and several examples by American artists such as John Peto, Jack Beal, and Gloria Vanderbilt. In addition to works by Robert Freimark, Blanche Lazzell, and Leslie Shiels, this exhibit will include three works that were acquired in recent years from the prestigious collection of the late Dr. William Gerdts, the preeminent scholar on American still life, and his wife, Abigail Gerdts. 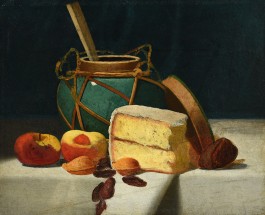