The use of clay to create utilitarian objects has been a feature of nearly every human civilization since the dawn of time. In many instances, pottery remains as the only record of vanished ancient cultures, a fact that serves as a testament to its amazing strength and durability. In the case of the multitude of cultures that flourished amid the Andes Mountains on the western side of South America for thousands of years, a stunning legacy of craftsmanship has been left behind in the form of the ceramics they created and used in their societies.

Evidence exists that pottery has been crafted in the region for more than four thousand years, arising from a continuum of cultures that also created sophisticated monumental religious architecture and crafted beautiful items of personal adornment such as jewelry and patterned textiles. The pottery that emerged from these societies exhibited a remarkable variety of shapes, colors and textures. Often using native terracotta clay that created a rich surface of brown color that could be decorated by stamping, engraving or painting, the artisans of the Andean region produced a massive body of work that included both utilitarian objects and funerary items.

Among the first gifts that came to the Huntington Museum of Art at the time of its opening in 1952 were collections of Peruvian ceramics from Mrs. Gertrude Vandergrift and Mrs. Irene Caldwell. In 1991, a large collection of pottery was given to the Museum by Mrs. Caldwell’s daughter and her husband, Irene and Jack Neal. These gifts will be showcased in an exhibition that highlights a variety of Andean societies and the pottery that was created there, especially the stunning work produced by the Nazca and Chimu cultures. 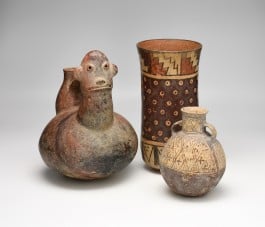 ​These three Peruvian ceramic pieces are part of the Huntington Museum of Art’s Permanent Collection. Photo by John Spurlock.