From Rugs to Riches: Treasured Textiles from the Permanent Collection

Opening reception coincides with Holiday Open House from 1 to 4 p.m. Sunday, December 4, 2011, with demonstrations of spinning, weaving, knitting, and quilt piecing, in addition to music and dance performances, a visit from Santa Claus, refreshments, and much more.

In the almost sixty years of the Museum’s existence, a wide range of beautiful textiles have been given to the Museum by generous donors forming a substantial “collection within a collection.”

Some of these works have become well known to our visitors over the years, including the Near Eastern Prayer rugs on view in the Touma Gallery, George Washington’s Cherry Tree quilt, and the large French Tapestry which depicts the goddess Diana returning from the hunt. However, these are just a few of the riches within the collection. Because of the fragile nature of textiles (they are highly susceptible to the fading effects of overexposure to light), many of these works rarely go on display.

From Rugs to Riches: Treasured Textiles from the Permanent Collection will display a wide variety of textiles from all over the world including French tapestries; Near Eastern Prayer Rugs; American quilts, coverlets and hooked rugs; Chinese robes; a Japanese kimono; Native American beaded items; Pre-Columbian Peruvian weavings and bags; paisley shawls and tie-dyed fabric from India and the Near East; and French and American beaded bags from the 1920s.

The Museum was fortunate to have Jennifer Pisula as an intern during the summer. Jennifer is a graduate student at Rhode Island University studying Historic Textiles and Costume and was able to work with curatorial staff on the selection, display and conservation of many of the Museum’s textiles. We thank Jennifer for all of her assistance.

This exhibit is sponsored by The Herald-Dispatch, West Virginia Division of Culture and History; the West Virginia Commission on the Arts; and the Isabelle Gwynn and Robert Daine Exhibitions Endowment. 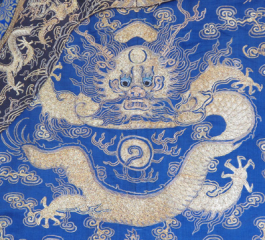