For the Joy of Light: Paintings by Robert Singleton & Soundscapes by Dan Morro

From his mountaintop home in Hardy County, West Virginia, painter Robert Singleton has a splendid panoramic view of the surrounding countryside in one of the state’s most picturesque regions. For nearly 40 years, Singleton, a “West Virginian by choice” has sought privacy and uninterrupted time to work and be introspective, and the space to breathe freely and search for life’s answers in this remote location.

Now approaching his 80th birthday, his journey through the years has followed a fascinating path that saw him go from an esteemed and celebrated position in the art world with numerous awards and museum shows to a deliberate retreat into solitude in which he bid farewell to the fame and acceptance he once sought.

Although he continued to work as a painter, his focus turned more to nurturing human relationships, especially as they relate to end-of-life experiences. Singleton embraced the work and personal friendship of Dr. Elisabeth Kübler-Ross, whose influential book On Death and Dying helped strengthen the modern hospice movement, and he provided compassionate care for a number of family members and friends during their last days, especially those who were victims of the AIDS epidemic. “I personally feel the single beneficial motivation of life centers upon the compassion of the connections we share with our fellow humans,” he said.

While Singleton’s attention was occupied for many years by the demands of caregiving, the urge to get back to his artwork eventually resurfaced. “In the summer of 2012, after more than a 10-year hiatus from painting, I rediscovered the pure joy of the creative emergence,” and he immersed himself in developing new work. He not only returned to his studio but began an active exhibition schedule, including a 30-year retrospective at the
Landes Art Center in Petersburg, West Virginia, in 2015 and a recent gallery showing in Lewisburg, West Virginia.

The Huntington Museum of Art will host an innovative showing of Singleton’s work in an exhibition that will feature several large-scale paintings accompanied by dynamic lighting in a darkened environment, along with original music composed by German musician Dan Morro.

Singleton said the exhibition will capitalize on the half-century of his experiences as an artist. “I seek a means of involving all human beings, not as viewers, but as participants in the ageless impact of the creative emergence.” He hopes the installation will be “a means of uncovering the core of our intuitive understanding and cumulative experience ingrained and transmitted through generations since the dawn of time… (serving
to) document my search for our shared universal awareness.” 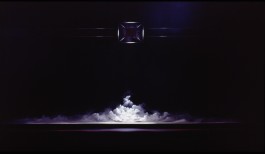 Light often plays a significant role in Robert Singleton’s work, including this painting by the artist. Image courtesy of the artist.