Excavations from the Vault: Herman Dean and the Hudson Bay

Most of us know Wayne County, West Virginia, native Herman P. Dean (1897-1978) for his impressive collection of historic firearms which he donated to the Huntington Museum of Art beginning in 1953, forming one of the most treasured legacy collections of the institution. Herman Dean also loved to travel, and was an active sportsman, and a prolific writer. A book titled Travel Notes written in 1957 includes a section he called Eskimoland which chronicles his travels in the Arctic. Today the area is known as Nunatsiavut (Northern coastal Labrador), Nunavik (Northern Quebec), and the territory of Nunavut and the Inuvialuit region (Northwest Territories). In 1950 Dean traveled aboard theM.V. Rupertsland, a Canadian trading vessel registered to the Hudson Bay Company. Embarking from Montreal, Dean sailed up the St. Lawrence River, through the Straits of Belle Island, up the coast of Labrador to Port Burwell on the Northern tip, and into the Hudson Bay. The Hudson Bay Company was engaged in trade with the Inuit People along the coasts of Northern Quebec and Baffin Island and Dean visited many of the ports and villages including George’s River, Ft. Chimo, Payne Bay, Sugluk, Cape Smith, Povungnituk, Churchill, Southampton Island, Cape Dorset, Repulse Bay, Igloolik, Chesterfield, Baker Lake, Lake Harbor, Frobisher Bay, and Paugnirtung. Dean mentions in Travel Notes that “It was my privilege to be the first white man to set foot on the soil at Povungnituk, with the exception of H.B.C. (Hudson Bay Company) personnel.”

On this trip, Dean took more than 400 photographs depicting the Inuit Peoples; sea ice and coastal landscape views; staff of the Hudson Bay Company posts; and crew on the M.V. Rupertsland. During this trip and during other adventures in the Arctic regions, Dean collected art and artifacts created by Inuit artists, including items made for trade such as figural stone and ivory sculptures, and hand woven, decorated baskets, as well as ivory objects used in everyday life such as a knive, snow goggles, and fish hooks. These items were a bequest from Herman Dean’s Estate to the Museum in 1978. A selection of photographs (which have never before been on view), and sculptures will be presented in Gallery Three.

This exhibit is sponsored In Memory of Jim Hollandsworth; Bob and Barbara Kress Bias, In Memory of Herman P. Dean; the Isabelle Gwynn and Robert Daine Exhibition Endowment; West Virginia Division of Culture and History; and the National Endowment for the Arts, with approval from the West Virginia Commission on the Arts. 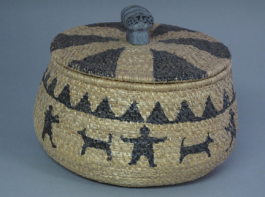