A free opening reception is planned for this exhibit on July 26 from 5 to 7 p.m. with a presentation by artist Karen Bondarchuk.

On August 1, 2014 Canadian-born artist Karen Bondarchuk set out to mark the passing time that her mother – diagnosed with dementia in 2010 – no longer could. For 365 days, she produced an image of a crow each day on a hand-cut, hand-gessoed panel, remembering her mother as she once was and grieving her loss. “I chose to create a crow a day for 365 days as a way of marking days that she no longer recognizes,” the artist said.
Bondarchuk’s choice of motifs was one that has a recurring presence in her creative output. “Crows have figured largely in my work for several years and represent both the quotidian and the extraordinary (akin to the Buddhist notion of ‘ordinary magic’).” The title of the exhibition, Ergo Sum, is drawn from Rene Descartes’ famous proposition (Cogito, ergo sum) that is translated “I think, therefore I am,” a phrase that takes on new meaning in the context of the thought-robbing effects of dementia. These works will be featured in an exhibition, organized by the Woodson Art Museum of Wausau, Wisconsin, that will open July 20, 2019, in the Huntington Museum of Art’s Daine Gallery.

The process of creating the series was quite arduous, given the sheer quantity of the resulting work, but Bondarchuk found a great deal of quiet satisfaction and introspection in the project. “The labor that went into producing each of the 365 panels – cutting the wood, creating my own gesso, building up layers and sanding between coats in preparation for the actual process of creating an image – evoked the overwhelming labor and repetitious activities of motherhood. To me the series is simultaneously a marker of her lost time and a constant and acute reminder of my own days, my life, and an attempt to signal visually the preciousness and individuality of each day. As such, quirky cheer and serendipity inhabit many of the panels, however more sober the project seemed to me at its outset.” The resulting work explores communication and an artist’s relationship to the world; it resonates for its depth, beauty, and elegiac and potent whimsy.

Bondarchuk has exhibited widely in the United States, as well as in Canada, England, France, Italy and India, and has completed residencies at the Moulin a Nef in Auvillar, France, the Virginia Center for Creative Arts, Vermont Studio Center and Ragdale Foundation. Her work is in the permanent collection of the National Gallery of Canada, the Woodson Art Museum and several other public and private collections. Bondarchuk
received her MFA in sculpture from The Ohio State University in Columbus, Ohio, and her BFA in sculpture and video from the Nova Scotia College of Art and Design (NSCAD) in Halifax, Canada. She is an associate professor and foundation area coordinator in the Frostic School of Art at Western Michigan University in Kalamazoo, Michigan.

This exhibition is organized by the Woodson Art Museum of Wausau, Wisconsin. 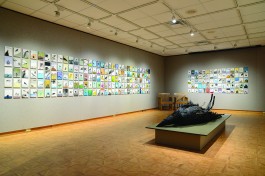 This is an installation photo of the Ergo Sum: A Crow a Day exhibit. Photo courtesy of Leigh Yawkey Woodson Art Museum.