Opening reception for this exhibit takes place on September 9, 2018, from 2 to 4 p.m. Jody Lamb of Ohio University will speak. Admission is free.

Danish-American painter Emil Carlsen (1853-1932), well-known to Huntington Museum of Art patrons through his three canvases in the HMA collection, will be the focus of a traveling exhibition that showcases his work as a landscape painter. While Carlsen has received much acclaim for his still-life paintings, he was also an accomplished landscape painter who was lauded by critics and collectors during his lifetime.

His lush, painterly and deeply satisfying paintings took the influences of impressionism and tonalism a step further in the direction of serenity and quiet sensory beauty. He was also a gifted teacher who influenced generations of artists through his insightful instruction and thoughtful philosophy.

He maintained close friendships with many of the leading American painters of his day, including John Twachtman and J. Alden Weir, and won numerous awards for his works at prestigious venues such as the St. Louis Exposition in 1904 and the Sesquicentennial Exposition in Philadelphia in 1926.

The exhibition is organized by the Yellowstone Art Museum in Billings, Montana, and will be drawn in part from two private collections that include works by Carlsen that are not well known to aficionados of American painting. Additional works are included from museum collections, including that of the Huntington Museum of Art, with both The Heavens Are Telling and The Surf, Rocks and Water among the selections. Both HMA works are part of The Daywood Collection, and were acquired by Arthur Dayton during Carlsen’s lifetime. Mr. Dayton held Carlsen in the highest esteem, and was an admirer of both his landscapes and his religious subjects.

The exhibition is supported in part by grants from the scan | design foundation, Seattle, Washington; the American-Scandinavian Foundation, New York; and numerous private sponsors. 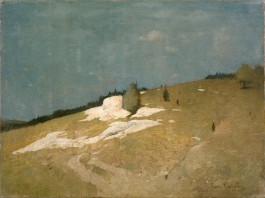