The tale of the 47 ronin recounts one of the most celebrated incidents in Japanese history, one that has inspired numerous works in poetry, drama, film and visual art. The story begins in 1701 with the forced suicide of Asano Naganori, prince and lord of the Ako castle and master of a band of loyal samurai. This tragic event was instigated by rival master Kira Yoshinaka, who had been offended when Asano threatened him with a sword.

With their leader gone, the warriors were forced to surrender their castle and became ronin (masterless samurai). Despite their humiliation, they collectively decided to bide their time before seeking revenge. After waiting patiently for months, the ronin gathered in Edo (present-day Tokyo) and attacked their enemy, killing Kira and placing his head upon Asano’s grave. Though the ruling government official (shogun) expressed some admiration for the loyalty of the warriors, he nevertheless ordered them to commit ritual suicide because they had exacted their revenge outside the laws of the land. The actions of the warriors became symbolic of the highest achievement of loyalty, honor and sacrifice, and further cemented popular admiration of the samurai tradition.

The story was often celebrated by artists in the form of woodblock prints. Utagawa Kunisada II (1823-1880), also known as Toyokuni IV, illustrated more than 200 books and created more than 40 series of prints
during his lengthy career. His illustrations of the 47 ronin story are derived from the popular kabuki drama and puppet theater play The Treasury of Loyal Retainers. This exhibition features 12 woodblock prints that illustrate this enduring and fascinating story.

This exhibit is presented by E. Rhodes and Leona B. Carpenter Foundation. 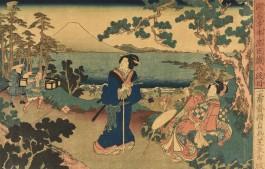