The opening reception for this exhibit is scheduled for April 26, 2022, at 7 p.m. as part of the 4th Tuesday Tour Series at the Huntington Museum of Art.

Charles “Chuck” Burkart was a passionate collector of Asian art, military memorabilia, and books. A voracious reader with a keen intellect and a curious personality, Burkart spent more than four decades working in higher education with about 20 years at West Virginia University. Upon his passing in 2019, the Huntington Museum of Art received an astounding bequest of more than 350 artworks, nearly all 19th and 20th century Japanese woodblock prints. This survey exhibition, E. Rhodes and Leona B. Carpenter Foundation presents East to West: Japanese Prints from the Burkart Collection, highlights 40 woodblock prints by 11 Japanese artists whose work captured Charles Burkart’s attention. With a nod to West Virginia, the unlikely destination for this exceptional collection, this title evokes the cultural exchange that characterizes the history of Japanese woodblock printmaking.

The Huntington Museum of Art has partnered with Akiko Praylow, Japanese Outreach Coordinator for Marshall University, to present a community project, One Thousand Origami Cranes, in the museum’s Education Gallery. The crane, an important creature in Japanese folklore, is said to live for 1,000 years. According to tradition, the gods will grant a special wish to anyone who folds a group of one thousand origami cranes (senbazuru). Praylow worked with Marshall University and the Huntington community to fold 1,000 paper cranes for this project – no small task! Japanese calligraphy made by students in Marshall University alumna Emiko Hori’s calligraphy studio will also be featured in this display.

This exhibit is presented by the E. Rhodes and Leona B. Carpenter Foundation. 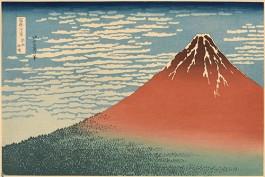