Vernon F. Howell, a Huntington native, taught art for 30 years (1959-1989), one year in Webster Springs, and 29 years at Barboursville High School. After retiring in 1989, Howell transitioned from being a beloved teacher to a much acclaimed, and sought-after artist. His work has been shown across the state of West Virginia, and beyond. While teaching art, (and coaching basketball, and rearing four children with his wife, Beverly), he still found time to make art. Taking an early retirement, however, has allowed Howell to focus full-time on his artwork, and in the past 25 years he has created a large body of work in a style uniquely his own. Howell’s work has received numerous accolades and awards, and in 2012 the artist was selected to receive the prestigious Governor’s Arts Award for Lifetime Achievement.

This exhibit will focus mainly on work created after Howell stopped teaching, yet in order to show a progression of style throughout his 55 years of making art, a number of imperative, older works will be included. Howell has always worked in a variety of media, including metal and wood reliefs, photography, oil and watercolor painting, pen and ink drawing, transfer prints, and stained glass, but he is best-known for his works in collage and mixed media. Inspiration comes from architecture, grids, maps, mechanical parts, engineered structures, pattern and repetitive designs.

The artist has always been keenly interested in, and drawn to subjects depicting high contrast; studies in positive and negative spaces. These “contrasts” later turned into shallow relief sculptures and shadow-box like constructions in which the artist layered photographs and found images atop one another, separated by glass or Mylar sheets. Recent collage and mixed-media works also experiment with multiple layers and relief. These incredibly detailed imaginary interiors use elements of design and composition to become clever illusions of spatial depth. Humor and visual puns become more apparent the longer one spends with each piece.

This is the sixth Curator’s Choice exhibition presented by the Huntington Museum of Art. A brochure will be available in conjunction with the exhibit featuring an essay by organizing curator Jenine Culligan. 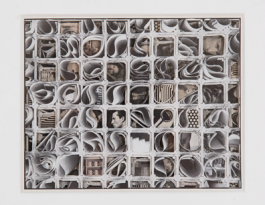