While most prominent art collections grow from an abundance of personal wealth, Dorothy and Herbert Vogel proved that even ordinary citizens can make their mark on the art world and build a noteworthy collection. Early in their life together, the couple decided to use Dorothy’s pay as a librarian at the Brooklyn Public Library for their living expenses and Herbert’s salary from his work at the United States Postal Service to purchase art. With an initial focus upon drawings, the couple slowly amassed a stunning group of artworks.

Beginning in the 1960s, they spent their free time attending gallery openings and getting to know young artists whose work was of interest. They would typically buy directly from the artists themselves and would form lasting friendships with them – relationships that continued even as many of the artists rose to fame. As time went by, they accumulated more than 4,000 objects with a focus upon minimalist and conceptual art, including work by luminaries such as Sol Lewitt, Christo and Jeanne-Claude, Richard Tuttle, Chuck Close, Lynda Benglis, and Robert and Sylvia Mangold.

As the collection grew, it began to strain the bounds of their one-bedroom Manhattan apartment. The solution to their lack of storage space came when they agreed to donate their entire collection to the National Gallery of Art. The transfer of the work took five full-size trucks to move the work to Washington, D.C. Even the National Gallery found the size of the collection to be overwhelming, so eventually a plan was hatched by one of its curators, Ruth Fine, (with approval from the Vogels) to gift fifty of the works to one museum in each of the fifty states as part of a program known as Fifty Works for Fifty States. In West Virginia, the Huntington Museum of Art was chosen to receive one of the distributions of what Fine called a “mini-Vogel collection.” Included in the HMA selection are drawings by Richard Tuttle and Robert Mangold, sculpture by Lynda Benglis and Donald Sultan, and a selection of paintings by a diverse group of artists that present a snapshot of the Vogels’ remarkable collection.

This exhibit is presented by Community Trust Bank. 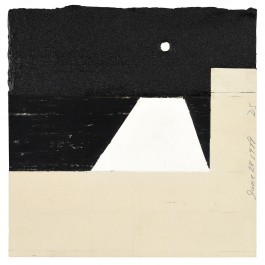 Donald Sultan (American, b. 1951), Moon and Moonbeam June 28, 1979, 1979. Vinyl asbestos tile on wood; 12 x 12 inches. Gift of The Dorothy and Herbert Vogel Collection: Fifty Works for Fifty States, a joint initiative of the Trustees of the Dorothy and Herbert Vogel Collection and the National Gallery of Art, with generous support of the National Endowment for the Arts and the Institute of Museum and Library Services, 2008.10.37.