Central to Their Lives: Southern Women Artists in the Johnson Collection

Please join us for the opening reception for this exhibit on March 3, 2019, from 2 to 4 p.m. with Martha R. Severens, former curator of the Greenville County Museum of Art and longtime collaborator with The Johnson Collection, presenting The Dr. Lawrence B. and Shirley Gang Memorial Lecture on Central to Their Lives, an exhibit of artwork by women artists of the South, borrowed from The Johnson Collection, Spartanburg, South Carolina. Martha R. Severens is the author of several books, including “The Charleston Renaissance” and “Andrew Wyeth: America’s Painter.”

Nell Blaine’s assertion about the centrality—the essentiality—of art to her life has a particular resonance. The Virginia painter’s creative path began early and, over the course of her life, she overcame significant barriers in her quest to make and see art, including serious vision problems, polio, and paralysis. And then, there was her gender. Growing up in the South, the expectations for a young woman probably did not include a career as a professional artist. In that society, Blaine noted, art was often considered “a genteel thing, prissy, and somewhat bland.”

Most Southern women were steered toward more domestic pursuits, and many talented women artists abandoned their creative endeavors once they married. Some, however, broke free of societal expectations to become successful painters, sculptors, and printmakers. Many moved to large urban areas such as New York City, but others remained in the South and pursued their passions, becoming influential teachers and exhibiting artists.

Spanning the decades between the late 1890s and early 1960s, this exhibition examines the particularly complex challenges female artists confronted in a traditionally conservative region during a period in which women’s social, cultural, and political roles were being redefined and reinterpreted.

How did the variables of historical gender norms, educational barriers, race, regionalism, sisterhood, suffrage, and modernism mitigate and motivate women seeking expression on canvas or in clay?

Whether working from dedicated studio spaces, in spare rooms at home, or on the world stage, the artists showcased made remarkable contributions by fostering future generations of artists through instruction, incorporating new aesthetics into the fine arts, and challenging the status quo.

Located in Spartanburg, South Carolina, the Johnson Collection seeks to illuminate the rich history and diverse cultures of the American South. With holdings that offer an extensive survey of artistic activity from the late 18th century to the present day, the collection works to advance interest in the dynamic role that the art of the South plays in the larger context of American art and to contribute to the canon of art historical literature.

This exhibit is presented In Memory of Women’s Art Historian Chris Petteys. 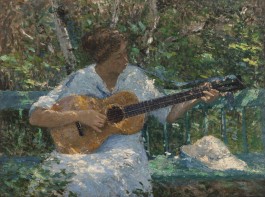