Art of the Portrait

The act of creating a likeness of yourself or another human being has been a fundamental component of the western idea of art, beginning in early civilizations and reaching full glory in the age of the Renaissance.

Portraiture served the needs of individuals and families by creating an historical record of a subject for present and future generations. It was also a powerful tool for governments and religious organizations, as images of those individuals who were deemed to be important appeared on the walls of palaces, courts and churches and were often distributed to the masses through likenesses on coins or currency or through prints, book illustrations or public sculpture.

Over the centuries, portraiture provided an important stream of revenue for painters and sculptors, though it was often seen as a subservient and tiresome undertaking that hindered creativity. The idea of an exact physical representation has historically been held up as the standard for portraitists, though that idea lost traction once photography became a cheaper and more accurate substitute, and an accompanying shift in styles began to favor artistic abstraction. Despite a turn away from an emphasis on high-style imagery, portraiture remains an important means of expression for the visual artist and it continues to fuel a debate on the ideas of identity and representation in art.

The Huntington Museum of Art has a strong collection of formal historic portraits, especially from 18th and 19th century Great Britain. Beginning in the 1950s, gifts from donors such as George Bagby established an important foundation for the collection, adding works by Sir Joshua Reynolds, George Romney, Gilbert Stuart and other significant painters. Over the years the collection has broadened to include a much wider range of likenesses, from ancient Roman portrait busts to more abstract works by artists such as Vanessa Bell and Chuck Close. A selection from the HMA holdings will highlight a variety of portraits in several mediums. 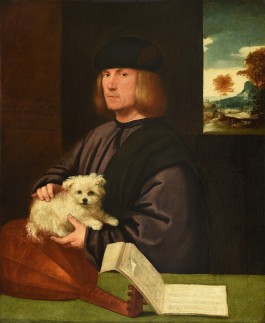