Perhaps no other painting style generates popular enthusiasm among modern-day museum-goers quite like impressionism. Filled with dazzling color, shimmering light and pleasant subject matter, the works are sensual delights that seem to instantly resonate with viewers.

It is difficult to imagine that the beginnings of the style in the 19th century brought with it a great deal of scorn and controversy. When Claude Monet and several associates showed their paintings in Paris in 1874, critics panned the work as unfinished and crude, and the subject matter (common landscapes and city views) was considered unacceptable for its lack of ideal or heroic qualities. Needless to say, the style caught on in a relatively short period of time, and by the time it began to be widely collected in America at the end of the 19th century, it had lost its radical edge and was embraced by native artists as an acceptable means to depict modern American life. While many American painters who had studied at the academies in Europe at first found the free-spirited qualities of the style to be objectionable, most of them soon adopted impressionist characteristics in their work and found a welcome audience in their home country.

The Huntington Museum of Art has a stellar collection of American impressionist works by many of the leading practitioners of the style, including five oil paintings by Childe Hassam, along with examples by Willard Metcalf, Frank Benson, John Twachtman, Edward Simmons, Robert Reid, and J. Alden Weir, all of whom exhibited together as part of the “Ten American Painters,” a group with impressionist leanings. Other artists of note include
Maurice Prendergast, Edward Potthast, William Glackens, Guy Wiggins, Theodore Butler, Hayley Lever, Gari Melchers, Arthur Meltzer and Paul Sawyier. A stellar landscape painting in the impressionist style by John Singer Sargent is also among HMA’s holdings. Works by these artists will be featured in this exhibition and will showcase the strong collection of American impressionist works that have been acquired since the museum opened in 1952. 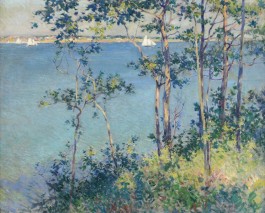