This exhibit will showcase a sampling of American paintings in the collection of the Huntington Museum of Art that feature the human form.

From ancient times, depicting the human figure has been a central focus for artists. As an artistic culture formed in the early days of the United States, figure painting, and especially portraiture, captured much of the attention of painters and sculptors, primarily because it was the one area that could provide vital paid commissions. Unlike their European counterparts, they could not take advantage of generous patronage from church or government entities, since the American versions of these organizations placed little emphasis on collecting art.

Much of the early portraiture was produced by modestly trained artists whose work is now considered “folk art,” such as Susannah Quarles Nicholson, whose series of portraits of a Virginia family is now in the HMA collection. The desire to honor national heroes such as George Washington spurred many artists to create history-based figural imagery and even recycle previous efforts, including Alvan Fisher’s copy of Washington at Dorchester Heights, a painting by Gilbert Stuart, which Fisher created as both a nine-by-six foot version (now in the Dedham, Massachusetts, Town Hall) and a smaller copy that is now in the collection of the Huntington Museum of Art.

By the latter half of the 19th century, a growing group of art collectors began to support the work of American painters, a development that provided the means to make a living and encouraged artists to move beyond traditional portraiture and still-life subjects. Genre paintings became especially popular, examples of which can be seen in the HMA collection such as Enoch Wood Perry’s finely rendered painting The Potter, and in Irving Wiles’ On the Porch. Charles Hawthorne’s The Clipper Ship Captain shows the influence of the Realist movement in the art and literature of the U.S. with its depiction of an aging and weary-looking resident of Provincetown,
Massachusetts.

As a wave of impressionism moved onto the American scene, painters such as Childe Hassam applied the style to traditional figure studies, as he demonstrated in his work The Butterfly. Although modernism and abstraction began to prevail in American art in the mid-20th century and move artists away from representational figure painting, an undercurrent of realism has been carried on through the work of contemporary artists such as Alan Feltus and Wade Schuman, both of whom have served as visiting artists in the Walter Gropius Master Artist Workshop program at HMA.

This exhibit is Presented by Garth’s Auctioneers & Appraisers. 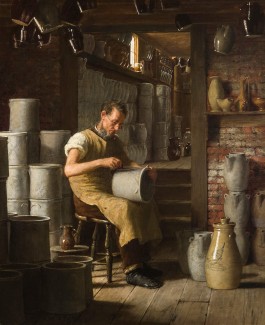