A TALENT FORGOTTEN: The Art of Edith Lake Wilkinson

HMA plans to show the documentary film about the artist titled “Packed in a Trunk: The Lost Art of Edith Lake Wilkinson,” which is available on DVD from Wolfe Video, on August 23, 2016, during the August Tuesday Tour. Admission to this Macy’s Free Tuesday event is free.

It has been close to 60 years since West Virginia artist Edith Lake Wilkinson died in Huntington, West Virginia, in 1957 after spending the final decades of her life in the city’s state asylum.

When the exhibit titled A TALENT FORGOTTEN: The Art of Edith Lake Wilkinson goes on view at the Huntington Museum of Art on July 2, 2016, the artist will finally receive some recognition for her work in a city where she lived for many years under the care of the state.

“The Huntington Museum of Art is very pleased to be the first art museum in West Virginia to own a number of original works by her,” said Geoffrey K. Fleming, HMA’s Executive Director. “This is also a historically important
occasion for a number of reasons. It will be the first major exhibition of Edith Lake Wilkinson’s artwork in nearly a century in her home state of West Virginia, and it is the largest number of her works ever assembled for
exhibition,” he continued.

Wilkinson was born in Wheeling, West Virginia, on Aug. 23, 1868. Wilkinson, who grew up with a passion for art under her mother’s tutelage, graduated from The Union School and moved to New York City in 1889 to study at the Art Students League. She remained at the League though 1891, where she studied with a number of important American painters, including James Carroll Beckwith, William Merritt Chase, and Kenyon Cox.

Later, Wilkinson began to travel regularly to the growing art colony located in Provincetown, Massachusetts. Here, among many other young, American artists including fellow West Virginian Blanche Lazzell, she thrived and honed her impressionistic technique. It was during her time there that she found herself at the forefront of the development of what has become known today as the “white line woodblock print,” a curiously American print form
developed by the artist and teacher, B.J.O. Nordfeldt. From 1913 through 1923 she would be a fixture during the summer months in the bohemian art colony along with her partner, Fannie Wilkinson.

Following the accidental death of her parents in 1922, Edith Lake Wilkinson increasingly fell under the control of the attorney handling their substantial estate, George Jackson Rogers. Years later, he was accused of pilfering his clients’ holdings, including those of Edith Lake Wilkinson, and he may have had her committed to an asylum to take total control of her money. She was first permanently committed to the Sheppard Pratt Hospital in Baltimore in 1925, and, in 1935, was moved to Huntington.

Edith Lake Wilkinson never left the state hospital in Huntington. Deprived of her ability to create art, she died there in 1957. Her artwork, which had been packed away in trunks in the family home in Wheeling, was rediscovered in the 1960s and since that time there has been a growing interest in her life and career.

A TALENT FORGOTTEN: The Art of Edith Lake Wilkinson will run at HMA through Sept. 18, 2016, with an opening reception on Sunday, July 17, 2016, from 2 to 4 p.m. Admission to the opening reception is free. A profusely illustrated catalog on Wilkinson, her life, and her works will be available for sale through the HMA gift shop.

HMA plans to show the documentary film about the artist titled “Packed in a Trunk: The Lost Art of Edith Lake Wilkinson” on Aug. 23, 2016, during the August Tuesday Tour on the day that is the 148th anniversary of Wilkinson’s birth. Admission to this Macy’s Free Tuesday event is free. The documentary film is available on DVD from Wolfe Video. 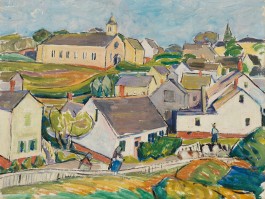