A Fragile Peace:  The Magic of American Cameo Glass From The Touma Collection

A free opening reception and catalog debut for this exhibit takes place on October 2, 2016, from 2 to 4 p.m.

The art of glassmaking traces its beginnings to ancient times in the early cultures of Mesopotamia and Egypt. As the centuries passed, glassmakers became very skilled in their mastery of this fiery material, and by the time of the Roman Empire, the ability to fuse together layers of colored glass to form the walls of a vessel offered the opportunity to carve sophisticated surface designs on these objects. This type of glass, known as cameo glass, was prized for its beauty and rarity, and is epitomized by the famous Portland Vase, a Roman example that is now in the British Museum. As the modern era approached, the incredible difficulty of making the multilayered glass blanks and the labor-intensive process required to carve and etch this fragile material discouraged most manufacturers from pursuing it, and although it was revived for a period in the 19th century, the technique lay dormant for most of the 20th century.

In the early 1980s, Kelsey Murphy was working as a graphic designer and sign painter in Cincinnati, when she began to experiment with the use of sandblasting apparatus to etch flat glass. After she achieved success in the elementary phases of this technique, she delved further into the glass decorating process, and with her partner, Robert Bomkamp (a former machinist in the aerospace industry), developed the ability to do highly detailed relief carvings in glass.

Seeking to move beyond flat glass, the team sought out a supplier of glass vessels, and that led them to Pilgrim Glass Corporation in Ceredo, West Virginia. This fortuitous meeting was quickly followed by a business agreement with Pilgrim and extensive experimentation with smaller items such as Pilgrim’s line of solid glass eggs. By 1986 they had graduated to far more sophisticated work, including the creation of a stunning cameo vase that portrayed the Statue of Liberty, a gift to Lee Iacocca for his work in the iconic statue’s restoration campaign. By this time, Pilgrim was completely sold on the potential of the new line, and in 1987 Kelsey and Bob moved to West Virginia to oversee the design and production of an extensive array of cameo glass for the company. The skilled glassblowers at Pilgrim were able to move from producing blanks with two layers of glass to the rarified territory of vessels with ten layers or more.

Sadly, this partnership came to an end when market conditions forced the closure of the Pilgrim factory in 2002. Among the legacies left behind were a number of uncarved cameo blanks, many of which were
eventually acquired by Kelsey.

Through the patronage of Dr. Joseph Touma, who commissioned these pieces, Kelsey has produced a series of works from among the last of the remaining blanks that consist of five layers of glass or more. Decorated with scenes derived from nature, mythology, human figure studies and even local landmarks and townscapes, the works are stunning displays of the designers’ work as well as a tribute to the local craftsmen whose skill in blowing the vessels made it all possible. These objects join a smaller display of Pilgrim cameo pieces in the HMA Glass Gallery (gifts of Dr. Touma and his wife, Dr. Omayma Touma) to showcase the remarkably exuberant glass creations that sprang from this West Virginia-based venture.

Presented with support from The Isabelle Gwynn and Robert Daine Exhibition Endowment and The Glass Club of Huntington.

A special thanks is due to Dr. Joseph B. Touma for his funding of the exhibition catalog. 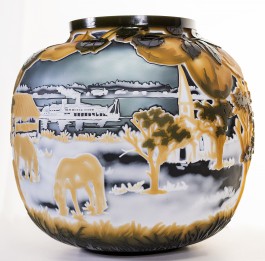