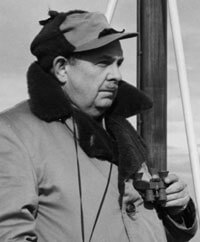 Herman P. Dean was born in West Virginia, and died in West Virginia, but during the 80 years in between he lived a remarkably rich life that took him to the far corners of the world, as well as establishing himself back home in the Mountain State as a journalist, publisher, businessman, and firearms expert and collector.

Born in Wayne, W.Va. on May 6, 1897, Dean’s interest in journalism developed at a young age. When he was just 9 years old, Dean wrote a weekly column for The Herald-Advertiser, which was the combined Sunday edition of The Herald-Dispatch and The Huntington-Advertiser, now defunct. Dean attended Bethany College and Ohio State University majoring in journalism. After serving in the Navy during World War I, he returned to Wayne and bought The Wayne News, changing its name to The Wayne County News to signify its reach across the county. In 1932, Dean bought Standard Printing and Publishing Company, which was located in Huntington. Though a commercial business, Dean used the presses to print books on firearms written by experts. 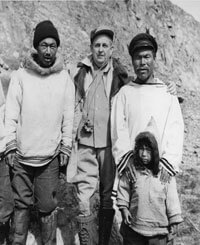 Not long after he purchased the publishing company, Dean began the first of his many travel explorations. His journeys took him through Europe, Russia, and South America, but perhaps Dean’s favorite locations were the Arctic regions, such as Hudson Bay. Dean traveled with Hudson’s Bay Company to different regions and provinces in Canada. Hudson’s Bay Company began as a fur trading company in the 17th century. By the 19th century, however, the company shifted its ventures to retail, and began selling items such as tea, coffee, and tobacco in its sale shops, which had formerly operated as trading posts. While traveling these parts, Dean developed a fondness for the Inuit he encountered, and often stated how cheerful, courageous, and friendly they were. Dean spent a lot of his time in the bay hunting. He once boasted that he’d shot “just about every animal in North America,” including a 1,650-pound Kodiak bear. As an avid hunter, Dean was knowledgeable about firearms, and began collecting them as a hobby. However, he soon found himself immersed in learning about the craftsmanship of the weapons, as well as the history behind them. 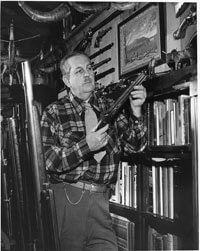 Dean was passionate about Daniel Boone’s ties to West Virginia, and once said that studying Boone opened the door for him to learn about all of West Virginia’s history. One of Boone’s guns, a flintlock rifle, is in Dean’s collection. Also included in the collection are a Remington percussion pistol and a Lefaucheux revolver that were allegedly left behind by the infamous James Gang during the 1875 robbery of the Bank of Huntington. Overall, the Herman P. Dean Firearms Collection holds nearly 400 items, and is widely considered to be one of the finest firearms collections in the country. Dean generously loaned his firearms collection to Huntington Museum of Art (then, Huntington Galleries) upon its formation in 1952, and later donated it to the museum. As a founder of the institution, Dean wanted the Huntington community to enjoy his collection just as much as he had when acquiring its pieces.

After retiring in 1961, Dean set up an office in Huntington, surrounding himself with the souvenirs of his travels, such as Inuit art carved out of soapstone in the shapes of various animals, tusks of ivory, and hunting pictures. During his later years, he also took time to teach tour guides about his firearms collection, as well as lead a few tours of his own. Dean died in 1978 at the age of 80, leaving behind a wealth of items and knowledge to the Huntington area, and around the world.

During the 1950s, Herman P. Dean made several trips to different regions and provinces throughout Canada with Hudson's Bay Company, which began as a fur trading company, but by the 19th century the company shifted its focus to retail. Dean became very fond of the Inuit he encountered in these Arctic regions. He also spent a great deal of his time hunting, and once claimed he'd shot "just about every animal in North America." Click here to visit the full page.